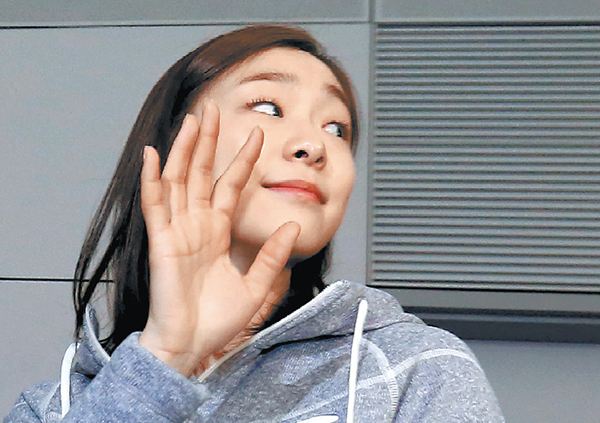 Kim Yu-na, the gold medalist in figure skating at the 2010 Vancouver Olympics, waves as she departs for Germany yesterday at Incheon International Airport. She returns to international competition at the NRW Trophy in Dortmund.[YONHAP]


Kim Yu-na, the Figure Queen of Korea, said yesterday that she is now at “80 to 90 percent” as she continues preparations prior to her return to international competition.

The defending Olympic gold medalist in women’s figure skating left for Germany yesterday to participate in the NRW Trophy in Dortmund this weekend, where she will compete internationally for the first time in 20 months.

“I think I am now in a condition where I can do the routines without overstretching myself,” the 22-year-old told a media conference held at Incheon International Airport. “It is hard to measure in numbers, but I think that I have recovered to 80 to 90 percent.”

Kim has been training for just five months, with her decision to compete in the 2014 Sochi Olympics coming in July. She has not competed since her runner-up finish at the World Figure Skating Championships in Moscow in April of last year, which triggered a host of speculations about a possible retirement.

The Dortmund competition is a second-tier international event that Kim would normally ignore, but she decided to compete there to earn the points necessary to compete in the World Championships to be held in Canada in March.

The International Skating Union, the world governing body of the sport, allows only an athlete that has earned a certain level of technical element scores (TES) from international events to compete in the world championships.

The minimum points Kim needs to earn in Germany is 28 in TES in the short program and 48 in free skating.

She will disclose her new routines for the first time in Germany, which her Seoul-based agency, All That Sports, gave a brief description of in August.

The agency said her short program is set to the tune of “The Kiss of the Vampire” from the soundtrack of the 1963 film of the same name, while she will free skate to a compilation of songs from “Les Miserables,” the hit Broadway musical based on the classic novel by Victor Hugo.

The competition will also gauge how successful she can be without the foreign coaches she had worked with over the past four years.

In October, Kim reunited with her former coaches Shin Hye-sook and Ryu Jong-hyun after parting ways with American coach Peter Oppegard, who coached her between October 2010 and April of last year.

Her first coach, Brian Orser of Canada, had worked with her between March 2007 and August 2010, during which Kim won the gold at the 2010 Vancouver Games. David Wilson, Kim’s choreographer for six years, is still with her.

The win at the Vancouver Olympics, Korea’s first-ever Olympic gold medal in figure skating, shot her to a level of stardom that few sports stars in the country had achieved before.

Her itinerary in international competition has dwindled since then as she had actively involved herself in corporate-sponsored events or gala shows. She also devoted her time to helping Korea’s successful bid to win the right from the International Olympic Committee to host the 2018 Winter Olympics in its eastern resort city of Pyeongchang.

She admitted that the pressure as the defending champion and the heightened public expectations also kept her from competing.

“The training is hard but now I can do it with a smile,” Kim said. “And that’s the difference.”