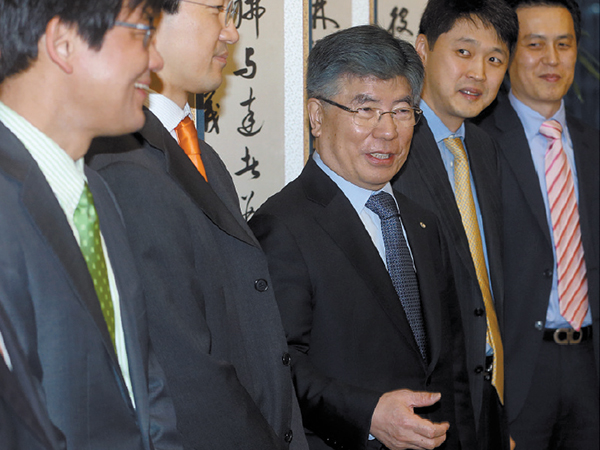 Bank of Korea Gov. Kim Choong-soo, third from right, talks at a meeting of investment bank experts held in the main building of the Bank of Korea in central Seoul yesterday. [YONHAP]

Korea’s top central banker yesterday expressed hope that the move by Korea and China to boost the use of their currencies for trade settlement would dispel talks over whether to extend the existing currency swap line.

Korea and China have agreed to use their bilateral currency swap line valued at 360 billion yuan ($57.8 billion) to bolster the use of the won and the yuan for trade settlement.

Bank of Korea Gov. Kim Choong-soo said in a meeting with experts from foreign investment banks that the move would serve as an occasion for upgrading the existing currency line into a permanent facility.

“What’s important is that the issue of whether the currency line will be extended would be dispelled by such a move,” the governor said.

The swap facility aimed at securing foreign exchange liquidity will be effective until 2014, subject to be extended upon agreement.

The central bank said Tuesday that the move to boost the won and the yuan would pave the way for making the existing currency swap line a de facto permanent facility.