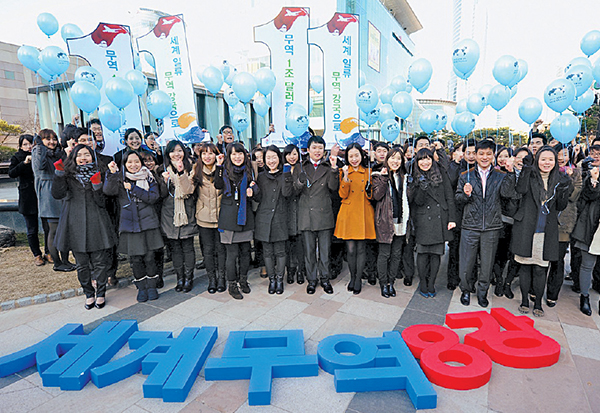 
Korea’s exports fared relatively well this year to rank eighth in volume despite the slump in global trade.

The country became the ninth member of the $1 trillion trade club last December, led by brisk exports and imports, and is on track to repeat the feat this weekend, the Ministry of Knowledge Economy said yesterday.

Outbound shipments hit $503.2 billion as of November, down 0.8 percent from the same period last year, according to the ministry.

For the first time petroleum products added the most fuel to the fire by accounting for 10.3 percent of the total. Products like gasoline and diesel showed more growth than key export items like semiconductors and automobiles and contributed $51.72 billion since January, up 9.8 percent from the same 11-month period in 2011. 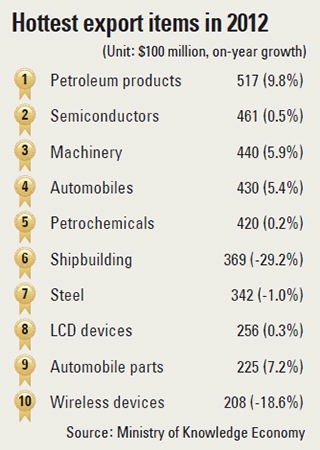 Three oil refiners - GS Caltex, SK Energy and S-Oil - together exported over $20 billion of petroleum products this year. GS Caltex won the $25 billion Export Tower Award for selling the most and Hyundai Oilbank shipped $8 billion worth.

The four refiners imported $100.8 billion of crude oil from the Middle East last year and exported over $50 billion won worth of petroleum products to other countries this year. Korean refiners started exporting highly refined oil products since 2008 despite the country not producing even a single drop of its own.

“Getting petroleum exports to the top spot is a monumental record in Korea’s trade history,” said Hur Dong-soo, chairman of GS Caltex, known for its aggressive investments in recent years.

“We’ve invested over 5 trillion won [$4.62 billion] in upgrading our facilities over the last five years in order to turn low-value crude oil into high-value refined oil products,” said Lee Byung-moo, a senior vice president of GS Caltex. “Since the outlook for domestic sales isn’t so bright, we will keep expanding exports next year.” 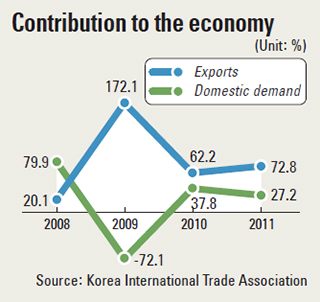 Meanwhile, Samsung Electronics has seen its exports decline this year after they beat $65 billion in 2011.

“In order to create a trade market that can be insulated from global economic uncertainties, Korea needs to increase service exports and help small exporters pioneer into overseas markets,” said KITA Chairman Han Duk-soo at the ceremony. Han also called for the need to utilize the country’s free trade agreements with major countries.

Korea’s exports will likely expand 4.6 percent on-year in 2013, a turnaround from this year’s contraction, with the world economy forecast to make a gradual recovery, KITA forecast.

Outbound shipments are expected to reach $575 billion next year and imports to grow 4.8 percent on-year to $545 billion, the trade organization said. The trade surplus will likely climb to $30 billion for 2013, from an estimated $29.5 billion in 2012, it added.

“Demand from importing countries is expected to increase and export prices of chips and panels will rise next year with the recovery of the global economy and trade,” said a researcher at KITA. 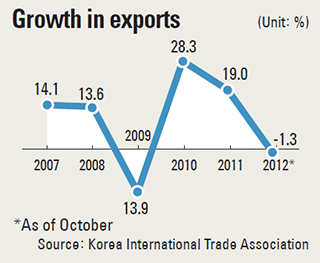 World Trade Organization data show that the number of anti-dumping duties imposed by member countries dropped to 98 in 2011 after peaking at 141 in 2009, but had already hit 74 in the first six months of this year.

“Europe’s fiscal crisis is unlikely to be resolved in the short term and trade conflicts between China and the U.S. are escalating, so protectionist moves will gain ground across the world,” the researcher said.