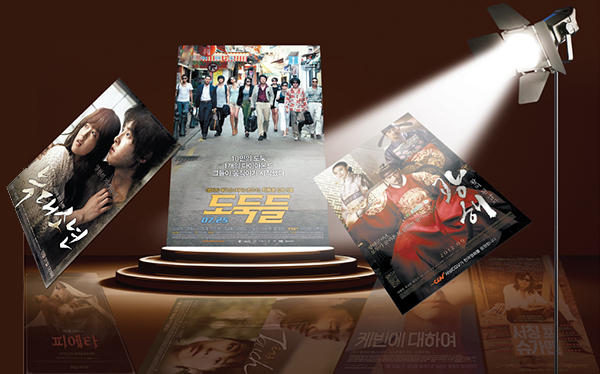 Controlling investment, production, distribution and screenings, so-called “film chaebol” dominate the Korean cinema with such films as (top, from left) “A Werewolf Boy,” “The Thieves” and “Masquerade.” At a disadvantage are small producers of films like (bottom, from left) “Pieta,” “Touch,” “We Need to Talk About Kevin” and “Searching for Sugar Man.”


* This is the second and last of a two-part series on the state of Korea’s film industry, focusing on the expanding control of conglomerates.


For the Korean movie industry, 2012 has been a very good year.

It recorded more than 100 million views through November. It was the first year that milestone was reached - with one month still to go, no less - and translates an average two domestic movies seen by every Korean. That is twice the per capita views in the United Kingdom and nearly four times more that in Japan, according to 2011 statistics from the Korean Film Council.

It has also been a landmark year for individual films. Both “The Thieves” and “Masquerade” exceeded 10 million in ticket sales, the first time a Korean movie has ever done so.

The total market share for Korean movies is about 60 percent, nearly double the 33.7 percent share of U.S. films. A representative of Dream West Pictures says the foreign-film distributor routinely avoids the release dates of Korean blockbusters when scheduling premieres. 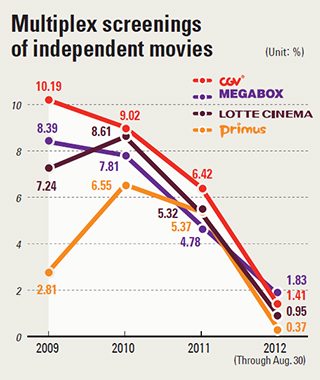 Such success would have been unimaginable just seven years ago, when members of the film industry took to the streets to protest a government decision to halve the number of screen days reserved for Korean movies from 146 to 73 a year.

Director Park Chan-wook used his 2003 masterpiece to make the point with a picket sign: “No screen quota = No ‘Oldboy.’”

Nonetheless, the quota cut took effect in July 2006, and both the number of local film views and market share dwindled.

The Korean film industry began to rebound in 2011 with a market-driven approach bankrolled by corporate behemoths.

“The argument that the lower quota would damage the Korean film industry has proved to be wrong-headed,” says Oh Jeong-il, an accounting professor at Kyungpook National University.

“Instead, the Korean movie market has become more competitive. They invest and make movies more carefully to survive amid fierce foreign competition.” 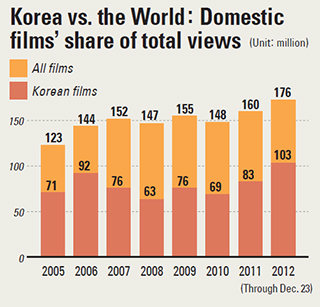 Despite becoming more competitive and resourceful, the corporate-oriented system engenders simmering frustration in an industry where a handful of conglomerates - notably CJ and Lotte - control investment, distribution and theaters.

A growing number of directors and other insiders have warned that such a vertically integrated system is weighed against low-budget independent films, stifling diversity and creativity.

Director Kim Ki-duk, whose “Pieta” won the Golden Lion at this year’s Venice International Film Festival, has been among the most vocal critics of the big corporations’ tight grip on distribution and screenings.

Kim points out that more seats were occupied for showings of “Pieta” than for any other movie, an indication that the independent film should have been shown in more theaters.

But “Pieta” was being shown at the same time as one of the movies that would break 10 million views. That’s the real “thief,” says Kim, alluding to the dominance of Choi Dong-hoon’s crime thriller “The Thieves.”

Kim went so far as to pull “Pieta” from theaters to raise awareness of the corporate dominance.

“There are countless films out there that won’t get a chance to screen due to politics at multiplex theater chains,” explained Kim. “In a bid to give other visionaries a chance, ‘Pieta’ will no longer be at theaters.”

The director’s view appears to echo the concerns of a number of film professionals. In April, the Korean Film Council found that 86.6 percent of 492 industry people believed that multiplex franchises discriminate against films not distributed by their company.

“Corporate behemoths owning distribution and multiplex chains have absolute control,” says Min. “Whether a movie is backed by the large companies is a key factor in how many theaters will screen the movie.”

CJ E&M hits this year include “A Werewolf Boy” and “Masquerade” and Lotte Entertainment is behind “Architecture 101.” CJ Group is Korea’s 12th largest conglomerate and Lotte the fifth.

Min also decided to pull his latest feature - “Touch” - from cinemas last month and filed an unfair trade complaint to the Korean Film Council on Nov. 13.

“My work is like my child. What kind of director could possibly want to kill his own child?” he said “But I decided to do so because it’s better than watching my child getting ripped off and meaninglessly prolonging the life.”

Despite favorable reviews at this year’s Busan International Film Festival, Min’s family drama, distributed by Pop Entertainment, secured only 88 theaters on the first day of its release. By contrast, CJ’s “A Werewolf Boy” shown on more than 588 screens and “Masquerade” 688 on their first days.

In addition to playing in few theaters, screening times were mostly before noon or at midnight.

“My friend living in Seoul had to go to Lotte Cinema in Bupyeong, Incheon, to watch my movie,” says Min. “It’s nonsense.” 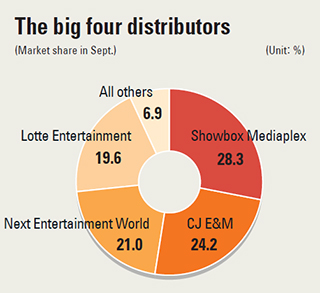 The power of large enterprises has intensified over the past four years.

“Until 2006, movie circles were not controlled by big firms. It’s was like, ‘You invest money, and we make a movie,’” says film critic Kim Young-jin.

Emboldened by the smashing success of Korea’s first Hollywood-style blockbuster “Shiri”(1999) and “Joint Security Area” (2000), a number of new, but largely unprepared, production companies sprouted up starting in the early to mid-2000’s, churning out films that failed to win over audiences and critics.

“As the business became more lucrative, many flocked to the business without enough experience and consideration,” Kim said.

The number of Korean movies reached 100 for the first time in 2006, but revenues kept dwindling to a record low in 2008. That was the year conglomerates started to get more involved in the business.

Many agree the new market-driven system can use resources effectively, but it is hard to deny that Korean cinema has become less an art form and more a commodity.

“I agree that the production database formed by big companies really helps. Still, film is more than the database,” says Shim Jae-myung, president of Myung Film, a production company.

“Under the current system, movie creators are too restrained while officials at the entertainment companies treat movies in a bureaucratic way. It is too much about avoiding risks,” says Kim. 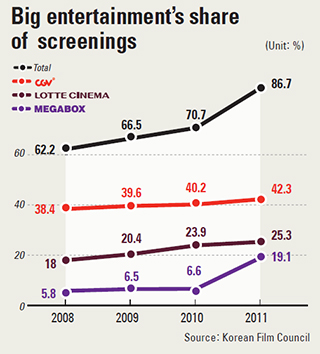 A world away from extravagant corporate support is the independent art-house film. Indie movie makers and distributors blame the restrictions of major multiplex cinemas for limiting public access - and the popularity - of their films.

“The number of independent movies is growing, but we have only an average of 15 to 20 screens [out of about 3,000],” says a representative of IndieStory, a distribution company.

“We sometimes release more than five movies. But we can have only about 30 screens, while other big blockbusters get 1,000. ”

“When considering release dates, we try hard to avoid the same days that movies backed by conglomerates open. Even in the United States, the most-anticipated Hollywood spectaculars would not have more than 1,000 screens,” says Lee Bum-su, head of Dream West Pictures which distributed such foreign films as “The Rum Diary,” “Heartbreaker” and “50/50.”

“I envied a multiplex in Chiang Mai [Thailand] where eight different movies are screened in the eight theaters.”

Acclaimed foreign movies such as “Searching for Sugar Man” and “We Need to Talk About Kevin” managed to secure fewer than 30 screens on their Korea release days.

Many observers raise the need for a policy to rein in the corporate power.

“The unfair screening issue will not be resolved if there is no policy-level discussion by the government,” notes critic Jeon Chan-il.

In response to escalating criticism, lawmakers and relevant government bodies have scrambled to come up with ways to address the issue. The most notable is lawmaker Jeon Byung-heon’s bill known as the “Pieta law,” which would establish a fund to operate art-house theaters.

In line with Jeong’s proposal, the Korean Film Council, a government-supported body that promotes Korean films, has taken measures to encourage diversity in Korean cinema.

The council recently announced it will increase funding for indie movies and build three art-house cinemas in Seoul and eight more around the country.

But some still question the effectiveness of such measures, saying they don’t address the fundamental problem.

“There should be a new quota system that requires theaters to screen a designated percentage of indie and art movies for a certain period of time,” says Kim Il-kwon, CEO of indie movie documentary distributor Cinemadal.