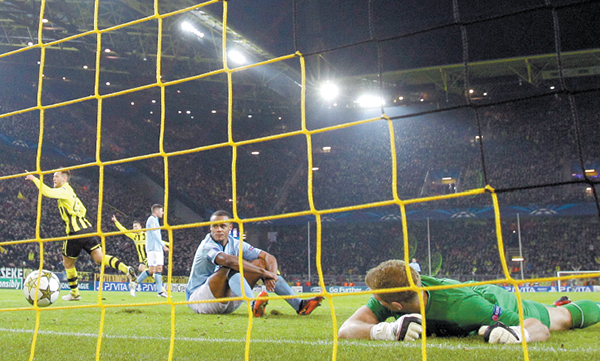 
Manchester City’s European season ended in ignominy when it lost its final Champions League group match 1-0 to a below-strength Borussia Dortmund and a goal from reserve striker Julian Schieber on Tuesday.

Schieber, starting only his second game for the club, slid home Jakub Blaszczykowski’s cross as the English champions again looked out of their depth at the European level.

Big-spending City, eliminated before kickoff and out in the group stage for the second season running, finished bottom of Group D with only three points and missed out on the consolation of qualifying for the much-maligned Europa League.

City is the first Premier League team not to win a game in the Champions League group phase and its points tally was the lowest recorded by an English side, eclipsing Blackburn Rovers’ record of four points from six games in the 1995-96 season.

Mario Balotelli, booed incessantly after coming on as a second-half substitute, summed up City’s evening when he was booked in stoppage-time for petulantly throwing the ball to the ground when a decision went against him.

“Was it the same old story? Yes. I don’t know why,” Manchester City goalkeeper Joe Hart told Sky Sports. “I’d love to answer it. We need to address it though.

“The intensity was there but once they scored it disappeared, which is a shame as we have showed we are a side that can come from behind. Of course we have let ourselves down, because we haven’t even got in the Europa League.

“There was a hunger to win tonight and if that meant Europa League than great. But we have got bigger issues than that. We were up against a weakened team and we had to win.”

Real Madrid crushed Ajax 4-1 at the Bernabeu on Tuesday but the Dutch side still finished third in Champions League Group D and have a shot at playing a Europa League final at their own Amsterdam Arena.

Jose Callejon bagged a brace for a Real side already assured of second place and Cristiano Ronaldo and Kaka weighed in with one apiece as a weakened Madrid team swept aside the visitors.

Derk Boerrigter pulled one back in the 59th to make it 3-1 but Ajax never really looked like troubling the nine-times European champions.

Arsenal missed out on the chance to finish top of Champions League Group B after surrendering the lead to lose 2-1 at Olympiakos Piraeus on Tuesday.

Tomas Rosicky’s first goal in nine months gave the north London side a 38th-minute advantage but the hosts came storming back with second-half strikes by Giannis Maniatis and substitute Kostas Mitroglou.

Schalke 04 finished top of the group with 12 points after drawing 1-1 at Montpellier, ahead of Arsenal, who were already assured of a place in the 16, on 10 points.

Greek side Olympiakos, who had qualified for the Europa League in third position before the match, ended with nine points from their six games.

Big-spending Paris Saint-Germain, struggling to deliver domestically on a huge investment by Qatari owners, showed they mean business in the Champions League by winning Group A at Porto’s expense on Tuesday.

PSG won 2-1 in the French capital thanks to a goalkeeping howler by Porto’s Helton who allowed Argentine Ezequiel Lavezzi’s low shot through his grasp.