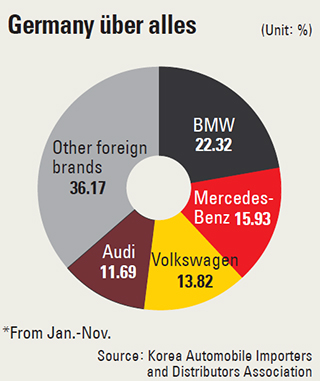 German automakers continue to dominate the growing imported car market with massive sales, but recent scandals are giving them a headache as their brand images are taking a hit.

According to the Korea Automobile Importers and Distributors Association (Kaida) yesterday, sales of imported cars jumped 35.1 percent on-year to a record monthly high in November, when 12,470 imports were sold.

This marked the third month in a row that foreign auto brands have posted monthly sales in excess of 12,000 units. Cumulative sales from January to November were 120,195, up 23.7 percent on-year. 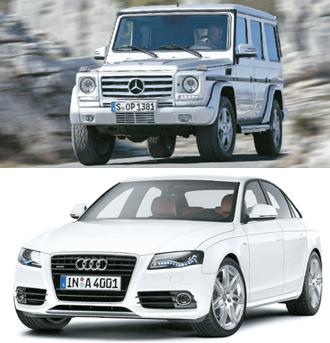 German brands make up nearly 65 percent of imported car sales this year, or 78,006 units, with BMW, Mercedes-Benz, Volkswagen and Audi the four best sellers. However, they have all hit roadblocks recently.

BMW is facing complaints from customers that it was selling its compact 320d with rusting seat frames. The issue became bigger when one customer protested in front of a BMW dealership in southern Seoul’s Gangnam District on Monday night. To make his point, he smashed the front windscreen of his 320d and further vandalized the chassis by spray-painting the words “natural born rusty car” on the front hood in red paint. He was reportedly seeking a free replacement model but was denied.

Some online clubs of 320d owners are now planning to stage a walkout to protest what they see as BMW Korea’s poor customer care.

BMW Korea said that during the process of installing new seat frames, some were transported without a metal coating and that caused them to rust. The importer added that it is calling owners to ask if they want the front seats to be recoated, but said there are no plans to issue a recall as the problem is not a safety risk.

Mercedes-Benz Korea, the No. 2 player in Korea’s import market, is trying to fill a hole in management after its 50-year-old CEO Thomas Urbach died last Thursday. According to industry sources, the German CEO, who reportedly suffered from depression for years, killed himself during a business trip to Stuttgart.

“It was a complete shock and everyone at Mercedes-Benz Korea is still trying to deal with it,” an employee there said. “A successor has not yet been found.”

Audi Korea, which on Monday appointed Johannes Tammer as its new head, is also dealing with an internal problem after one of executives was accused of embezzlement.

According to local media reports, one of the Audi dealers recently wrote an anonymous letter to the company claiming that the executive took a rebate from marketing agents and accepted bribes on a regular basis.

A person close to Audi Korea said the headquarters of the German automaker will conduct an investigation in the near future to check if the claim is true.

Volkswagen Korea also dented its brand image after a recent survey result from Marketing Insight, a local consumer research company, names it as the joint-worst foreign automaker in terms of customer satisfaction for its after service. It received 746 points along with BMW among 29,000 survey participants. Lexus, the luxury arm of Toyota, topped the survey with 837 points.