Jay Y. Lee is made vice chairman of Samsung

Jay Y. Lee is made vice chairman of Samsung 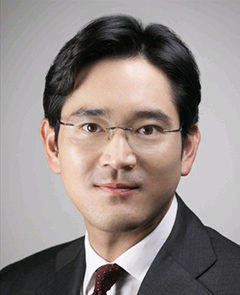 In the annual president-level reshuffle that promoted a total of 17 executives in Samsung Group, Chairman Lee Kun-hee’s sole son and eldest child moved closer to the top leadership of the world’s No. 1 producer of smartphones, computer memory chips and televisions.

“The promotion of Jay Y. Lee recognizes his outstanding achievements as a leader of innovation and as a change agent, which has led to Samsung becoming one of the world’s beloved brands and to a commensurate rise in shareholder value,” Samsung said in a statement. “Lee has also made invaluable contributions to the unprecedented growth of Samsung’s smartphone and TV businesses.”

Considering precedents, analysts thought this year was the right time for the junior Lee and first grandson of the late Samsung founder Lee Byung-chull to be promoted.

The 44-year-old, who graduated from Seoul National University and earned an MBA from Keio University in Japan, joined Samsung Electronics in 1991. He was promoted every year or two in the last decade, and two years ago he was named president, the highest post under a vice chairmanship.

But not everyone predicted Jay Y. - he officially uses the Western form of his name - would be elevated this soon given the presidential election in two weeks and the anti-chaebol sentiment whipped up by the candidates during the campaign.

As the largest chaebol, Samsung is the first to be attacked, especially on issues like family control of the group.