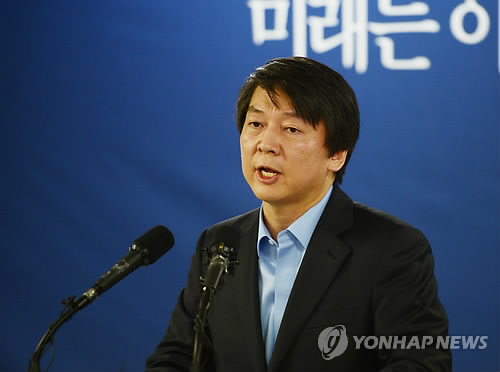 Sources close to the entrepreneur-turned-politician said Ahn may join Moon Jae-in in his visits to universities in Seoul later in the day.

"A decision has been made to lend his full support," a representative for Ahn told Yonhap News Agency. He said that a meeting with Moon could also take place.

The representative said that every option of assisting Moon is open at present, although he did not elaborate on the details.

The move comes two days after the 50-year-old former candidate offered "lukewarm" support to Moon in an event to mark the disbanding of his election office.

Ahn had quit the race abruptly on Nov. 23 after negotiations to iron out a mutually acceptable way to pick a unified liberal contender to compete with ruling Saenuri Party hopeful Park Geun-hye fell through.

The withdrawal was in accordance with a pledge to join forces so a single candidate can represent the liberal cause in the Dec. 19 election. Polls in the past showed that if two liberal candidates run in this year's presidential race, they would effectively split the votes and allow Park to become president.

The source pointed out that despite past differences and some friction, Ahn has done his best to help Moon.

"Giving up the race is testament to his devotion to bringing about change in government and assisting Moon," he said.

Related to Ahn's decision, Moon said in a meeting with aides earlier in the day, that he will desist from engaging in negative campaigning, and again expressed regret if the failed single candidacy debate hurt the feelings of Ahn's supporters.

Ahn had called for all candidates to stop their mud-slinging campaign, which he claimed went against the wishes of the people.

Moon also stressed that he planned to expand the base of support by winning the confidence of reformists and do his utmost to end the rule of the ruling Saenuri Party and the incumbent Lee Myung-bak administration.

Ahn's action comes as most national surveys taken after the formal start of elections on Nov. 27 showed Moon trailing Park and that many people who had supported the independent candidate have become undecided about whom to support when they cast their votes in 14 days time.

Pundits said that one of the only ways Moon will be able to make a comeback is for Ahn to give his support to the DUP contender that could allow the latter to win swing voters.

On the need to widen the support base of the liberal opposition, leaders of various civic organizations and progressive social activists said they will launch a new "national alliance" on Thursday that can merge supporters of the DUP, Ahn and various organizations that want to end conservative rule.

Hwang Sok-young, a well-known writer, said the national alliance is necessary because there is not enough time left in the race.

"The candidate that can bring about the change in government and open a new era in the country's political history is Moon, and he is the only one able to bear the responsibility," he said. (Yonhap)