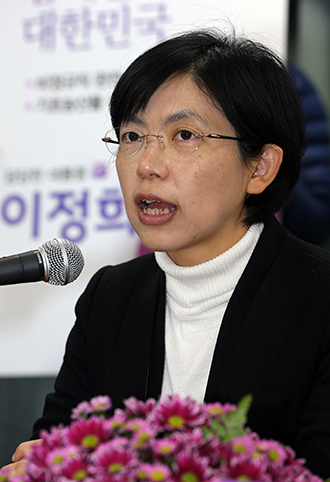 Candidate Lee Jung-hee, who is guaranteed to lose the presidential election in two weeks’ time, shook up the race with a no-holds-barred attack on front-runner Park Geun-hye at the first debate Tuesday night between the three main candidates.

Lee, who is running for the minor Unified Progressive Party, was criticized by many for keeping the two main candidates from squaring off on important issues. Others were shocked at her unconcealed, pro-North Korea attitude. At one point, she referred to the Seoul government as “the government in the southern side,” a North Korean formulation.

And many people said she should be kicked out of the next two debates held by the National Election Commission, especially since she’s such a minor candidate.

“Lee didn’t participate in the debate to show off her qualifications,” Lee’s spokeswoman Kim Mi-hyui told Yonhap News Agency. “If that was her intent, she would have debated calmly. She played the role of villain to lay bare the truth of Park.”

In the two-hour debate on political and foreign affairs, unification, and national security issues, Park of the Saenuri Party, Moon Jae-in of the opposition Democratic United Party and Lee discussed some sensitive topics.

Throughout, Lee made clear her hostility toward Park, declaring that her goal in running in the election was to stop Park from winning.

The former co-chairwoman of the UPP labeled Park “the first lady of the dictatorial era” and “queen of arrogance and high-handedness.” She also called Park’s father, the late strongman Park Chung Hee, a Japanese collaborator and said Park and the Saenuri Party have sold the country’s economic sovereignty to the United States through a free trade agreement.

Both the Saenuri Party and the DUP expressed disappointment at Lee’s performance.

“It was an embarrassment,” said Park Sun-kyu, a spokesman of the Park campaign. “Lee forgot her position and role [as a presidential candidate] and ruined the debate. Because of her, Park and Moon could not present their arguments. And the moderator failed to control the debate. We have two more debates to go, and we strongly demand that the National Election Commission come up with strong modifications.”

“She was aggressive but too confrontational,” said Park Yong-jin, spokesman of Moon’s campaign. “It is regretful that her attitude overshadowed our opportunity to present visions and policies. We hoped for an opportunity in which Moon could debate with Park face-to-face and compete on policies. To this end, many people feel frustrated and disappointed with Lee’s attitude.”

Even Rhyu Si-min, a well-known liberal, criticized Lee. Rhyu split from Lee’s UPP after the legislative election in April.

“It wasn’t a normal situation from the general perspective,” Rhyu said in an interview with PBC radio. “A candidate attends a presidential debate to win voters’ support for his or her policies and politics. But in this case, she declared that she participated not to win the votes but to take away another candidate’s votes.”

Rhyu said Lee’s attacks on Park will not necessarily hurt the conservative front-runner. “Lee gave catharsis to Park haters,” Rhyu said. “But we have to see if that actually lowers Park’s popularity.”

Many called for a change in the debate rules to exclude Lee.

As of now, a presidential candidate from a party with more than five lawmakers, or who obtained more than 3 percent of the votes in the previous general or presidential election, can participate in a televised debate. A candidate who scored higher than an average of 5 percent in opinion polls over one month before the campaign period is also qualified.

The UPP has six legislators in the National Assembly.

In the United States, the bar is much higher. According to the National Election Commission, it is a custom to invite candidates with more than 15 percent popularity ratings. France gives the TV debate opportunity to two runoff candidates.

“The law guarantees Lee’s participation in the debate, so there is no way to stop her now,” said Lee Chung-hee, professor of political science at Hankuk University of Foreign Studies.

“She has more than five lawmakers in her party, but her rating is as low as 0.2 percent. The problem is giving an equal opportunity to her despite her low support rate.” On Tuesday, the three candidates had equal amount of air time despite Lee’s far lower rating than two frontrunners.

Ryu Il-sang, honorary professor at Konkuk University and head of the National Election Broadcasting Debate Commission that organized Tuesday’s debate, said the current system was intended to protect minority parties and their candidates. He also said the commission had tried to improve the system but politicians didn’t listen in the past. “Our working-level officials already expressed concerns to the major political parties about the current system and made recommendations, but they didn’t pay attention,” he said. “So we had no choice but to organize the debate under the current law.”

Lee and the UPP were sanguine yesterday about the unusual attention they received from the peppery debate - whether positive or negative. In a JTBC-Realmeter poll held before the debate, Lee scored 0.8 percent on Tuesday. Her campaign expressed hopes it would rise after the debate.

It remains to be seen if Lee will actually complete the race.

During the debate, Park asked Lee if she was after a presidential victory or the state subsidy for the UPP for fielding a candidate in the election.

Lee replied that her goal was to stop Park from winning.

The Saenuri Party yesterday pressured Lee to state clearly her position about her candidacy since she had earlier expressed hopes of striking an alliance with Moon. “Lee must quickly conclude the alliance with Moon,” said Lee Sang-il, spokesman for Park. “If Lee quits the race to help Moon, the UPP must return the 2.7 billion won in state subsidies.”

In the debate, Moon tried to keep a distance from Lee, but still left the window open for an alliance.

Controversy also flared over Lee’s pro-Pyongyang positions. At the debate, she defended North Korea’s positions on such sensitive security issues as the sinking of the warship Cheonan in 2010, the validity of the Northern Limit Line (the de facto western maritime border between North and South Korea) and Pyongyang’s apparent plan to test a long-range missile this month.

She called the South Korean government “the government in the southern side,” a formulation often used by North Korea to cast doubt on its legitimacy. Although she quickly corrected it, the slip evoked criticism from the Saenuri Party and netizens. Politicians and officials normally refer to Seoul as “the government,” “our government” or, in formal situations, “the government of the Republic of Korea.”

Following the debate, the Web sites of the National Election Commission and the UPP were flooded with angry messages about Lee.

Because Lee undeniably stole the show Tuesday, concerns grew in the liberal arena that Moon could be the real victim of Lee’s frontal assault on Park. “If you only look at the debate skills, Lee’s performance was near perfect,” said Chin Jung-kwon, a liberal arts professor at Dongyang University, via Twitter. “But being good at a debate and winning the trust of the voters are two separate things.”

“Moon must make a preemptive move to severe the association with Lee by repenting the DUP’s past alliance with the UPP,” a Moon campaign strategist said. “Moon also needs to sternly criticize her attitude and remarks to highlight his stable and strong image.”

Meanwhile, a JoongAng Ilbo poll conducted after the debate on Tuesday showed that Park was rated the best performer. Among 552 viewers, Park scored 36 percent while Moon came in second with 29.2 percent. Lee scored 19.2 percent, while 6.5 percent said the three candidates gave similar performances.