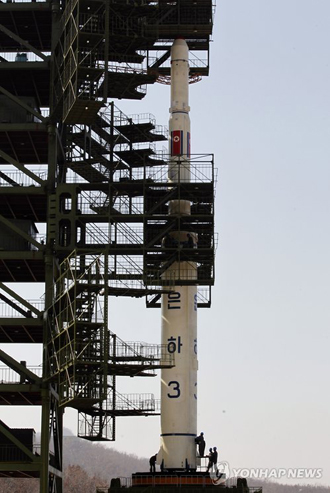 South Korea, the United States and Japan agreed in Washington on Tuesday to make stronger efforts to put diplomatic pressure on North Korea to keep the communist regime from launching a long-range missile as early as Monday, a senior government official from Seoul said yesterday.

The three countries also decided to strengthen cooperation with China and Russia, the two six-party talks members who are believed to have more influence on Pyongyang than any others, to persuade the North to drop its missile launch plan.

“Chief envoys of the six-party talks [from Seoul, Washington and Tokyo] met [in Washington] and agreed on the need to joint efforts to stop North Korea from firing a missile,” Lim Sung-nam, South Korea’s chief nuclear envoy, told reporters after a trilateral meeting on Tuesday.

“We will strengthen efforts to have China and Russia join us [in pressuring the North].”

Lim left the country on Tuesday to meet with his U.S. counterpart Glyn Davies and other officials before attending a trilateral meeting in the afternoon. His trip came several days after he visited Beijing last week where he met his Chinese counterpart Wu Dawei and other Beijing officials. There, Wu reportedly told Lim that “there shouldn’t be an incident that leads to instability on the Korean Peninsula.”

“South Korea and the United States shared the perception that the North’s planned launch is clearly a violation of the United Nations Security Council resolution and is also a challenge against the international society,” Lim said.

Shinsuke Sugiyama, Japan’s envoy on Pyongyang, also arrived in Washington and met with Lim and Davies.

During a brief meeting, Lim said, the three envoys made clear the UN Security Council should take appropriate steps in case of a rocket launch.

Lim, however, didn’t elaborate on what the three envoys discussed in detail including the speculation that the U.S. is reportedly seeking to tighten financial sanctions on the communist regime in case of another provocative act.

In addition, reports have come out that the three allies - Seoul, Washington and Tokyo - will locate all North Korean bank accounts around the world in the coming weeks to impose effective financial sanctions.

The North had also launched a rocket in April, claiming it was part of a peaceful space development program, but it failed after the rocket exploded in midair within two minutes after blastoff.

Seeing the launch as a disguised test of missile technology, North Korea faced international condemnation and has been under tough UN-led sanctions.

“The North’s plan is clearly a violation of the UN resolutions that ban any kind of launch using ballistic missile technology and it will only raise tension in the Northeast Asian region,” Ban said, urging Pyongyang to scrap its plan.