4 sailors give account of thrilling rescue from Somali pirates

4 sailors give account of thrilling rescue from Somali pirates 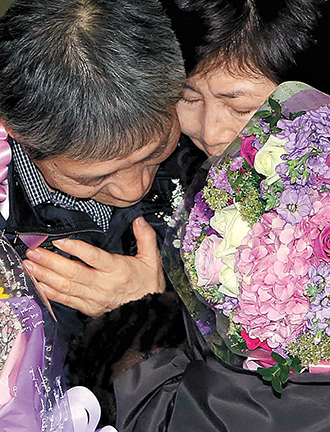 BUSAN - The four Korean sailors who were released last week after being held captive by Somali pirates for 582 days had to endure a near-death experience up until the last minute.

“I cannot forget how relieved we all were when we saw a rescue rope coming down from a helicopter with a taeguk mark [which represents Korea],” said Park Hyun-yeol, 57, captain of the 21,000-ton vessel MT Gemini, which was hijacked on April 30, 2011.

“It was as if a life rope was coming down from heaven as described in a fairy tale.”

There were 25 crew members, including four Koreans, aboard the ship operated by Singapore-based Glory Ship Management.

Last December, the pirates freed the ship and 21 crew members from Indonesia, Myanmar and China but the four Korean seamen were held captive as revenge for a rescue operation of the hijacked chemical tanker Samho Jewelry in January, 2011.

Yesterday morning, five days after their release, the four sailors arrived at the Incheon International Airport before heading to Busan, their hometown, where they shared their last-minute horrific experiences with the JoongAng Ilbo.

According to the sailors, things went smoothly based on the scenario of the rescue plan.

The shipping company dropped a bag full of money, the ransom, at the pirates’ base in Somali waters, and the four sailors were released and the pirates took them to a nearby seashore, some 20 kilometers (12.4 miles) away from the base.

But then things started to go wrong.

Tall surf due to bad weather kept lifeboats, which were dispatched by a rescue ship sent by the shipping company, from reaching the shore for nearly two hours.

Nervous, with a do-or-die attitude, the sailors one by one jumped into the sea to reach the lifeboats.

“We were all desperate [to reach the lifeboat], thinking that if we are not able to get on that rescue lifeboat, we would be dragged back to where we came from, which we considered hell,” Kim, said.

Kim, 57, jumped into the sea but with waves about 3-meters high (1-feet), he had to fight desperately for life.

Another sailor, Lee Geon-il, 63, also said, “The water surface only reached our necks but the waves were really high so it was a near-death experience for all of us.”

Due to the tall and strong waves, the rescue team had to give up and pull the boat out and return.

Several minutes later, a helicopter urgently dispatched from the Korean Navy’s antipiracy Cheonghae Unit deployed in the Gulf of Aden appeared with a loud noise high above the seashore.

“I cannot forget how relieved we were to see the helicopter,” Park said.