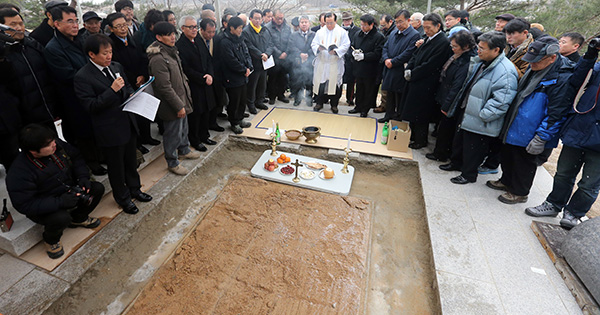 About 100 people attended a ceremony before civic activists exhume the body of Jang Jun-ha, a renowned anti-dictatorship activist who fought against the Park Chung Hee administration during the democratization movement but died of unknown causes. The activists and the bereaved family of Jang want a forensic inspection of his body, arguing his death remains a mystery. Jang was found dead in 1975 on a hill in Pocheon, Gyeonggi, while he was reportedly hiking on a steep cliff without any safety devices. The family say that there’s a six-centimeter (2.3-inch) hole in his skull, raising suspicion that he was assassinated by the Park regime, but forensic doctors say that it’s still uncertain whether it was because of an attack or an accident. [YONHAP]