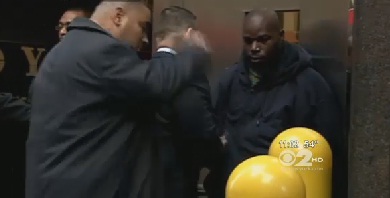 A 58-year-old Korean man was killed after being pushed in front of an oncoming subway train in New York on Monday afternoon, U.S. eastern time, causing an uproar among Korean Internet users. 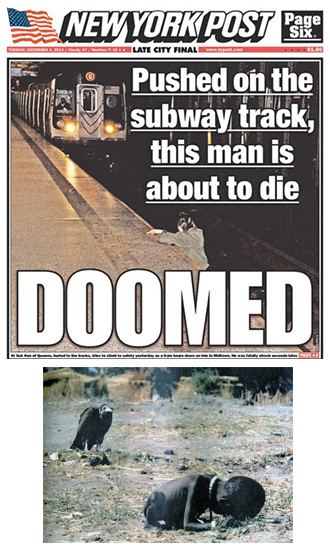 The death took place in a subway station near Times Square, when a 30-year-old suspect and Han Ki-suk began arguing for unknown reasons. The men are not believed to have known each other.

At the station of W49 Street and 7th Avenue the suspect, Naeem Davis, allegedly shoved Han onto the tracks around 12:30 p.m. Monday when the train was making its way toward the station.

Park Jung-dae, who uses the Twitter ID @jdae8776, tweeted “Mr. Han died as he was trying to protect other passengers in the subway.”

A photo taken by a freelance photographer for the local daily New York Post and its publication on its front page with a provocative headline stirred up controversy and angered Internet users like Park.

“The New York Post ran the photo on the front page saying this person [Han] is about to die. I strongly condemn the Post,” he tweeted.

Other Internet users expressed their frustration with the incident saying it is “tragic” and “outrageous” that Han was not helped by the photographer and the passengers at the site. Many Korean Internet users also conveyed their condolences to the victim.

The Post ran a photo of Han looking at the oncoming train, with his arms on the edge of the platform, trying to climb out, on its front page of the Tuesday edition with the headline “Doomed: Pushed on the subway track, this man is about to die.”

Witnesses at the site told local authorities Han, who lived with his wife and a college-age daughter in Queens, New York, was trying to calm Davis, who was shouting at fellow passengers on the platform.

Video from a commuter on the platform shows Han standing with his hands in his pockets, with the suspect cursing at him and telling him to go away before the suspect shoved him onto the tracks.

The New York Police Department said Tuesday they retrieved an empty pint bottle of vodka from Han’s body. He was on his way to renew his Korean passport, the Wall Street Journal reported.