Deadline to sign with LA set for this weekend

Deadline to sign with LA set for this weekend 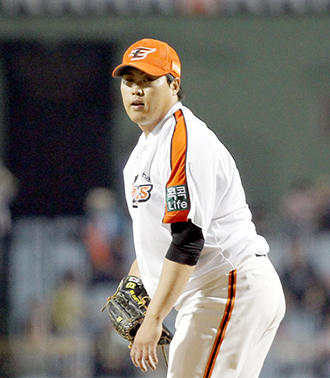 The deadline for Korean pitcher Ryu Hyun-jin to sign a contract with the Los Angeles Dodgers will fall early next week, a few days earlier than initially thought, according to officials yesterday.

The Dodgers in November won the exclusive negotiating rights for the 25-year-old left-hander, submitting a bid of about $25.7 million in a league-wide silent auction as part of the player posting process.

The Hanwha Eagles said on Nov. 10 they would accept this bid. The KBO commissioner’s office informed its MLB counterpart of this decision on Nov. 12.

Under the posting rule between the two leagues, the MLB team with the exclusive negotiating rights has 30 days to sign a player. The KBO had earlier explained that the deadline would be Dec. 12, Korean time, because MLB was officially notified on Nov. 12.

However, according to officials here, MLB has determined that the first notification of Eagles’ acceptance of the bid had come via telephone on Nov. 10, and that signaled the start of the negotiation period.

With that, the deadline is 5 p.m. Sunday in Eastern Standard Time, or 7 a.m. Monday in Korean time.

If Ryu and the Dodgers fail to come to an agreement, Ryu will return to the Eagles for 2013 and the Dodgers will retrieve their bid money. In that case, Ryu won’t be eligible for posting until November next year.

If Ryu does sign, he would become the first Korean to jump from the KBO to the majors, and the Eagles will keep the Dodgers’ bid as sort of a transfer fee.

Negotiations, however, have appeared to hit a snag. The Los Angeles Times this week has reported that Ryu has rejected a long-term contract offer.

Ned Colletti, general manager of the Dodgers, was quoted as saying, “Predictably, it fell a tad short.” Colletti also told the paper that he wasn’t sure how the Dodgers would proceed in the talks.

Earlier, Scott Boras, Ryu’s agent notorious for hard-balling antics at the negotiating table, said Ryu deserved to be paid like a No. 3 major league starter, and cited Daisuke Matsuzaka of Japan as an example.

Matsuzaka signed a six-year, $52 million contract with the Boston Red Sox after being posted before the 2007 season.

Later on Thursday, Korean time, the Orange County Register newspaper reported that Boras has now put a short-term contract on the table.

“We’ve offered a shorter-term contract [proposal to the Dodgers] as an alternative,” Boras was quoted as saying. “We think that helps them. And it helps us because we think his value will only go up.”

In apparent posturing, Boras has also said Ryu could opt to pitch in Japan next season and test free agency next winter without being subject to the posting process.

Ryu has repeatedly stated that his only preferred destination overseas would be the U.S. There is no posting between Japan’s Nippon Professional Baseball and the KBO, and Korean players must be free agents to move to the Japanese competition.