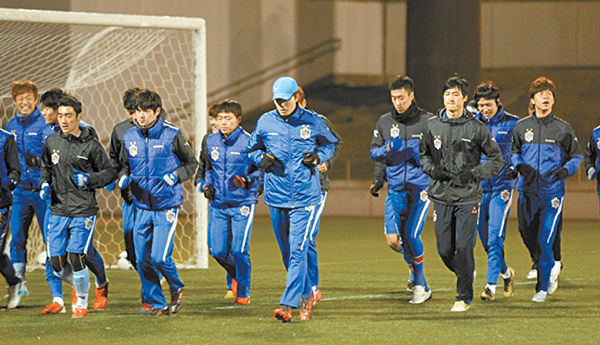 Ulsan Hyundai players train in Japan on Wednesday ahead of their debut match in the FIFA Club World Cup against Monterrey of Mexico on Sunday. Provided by Ulsan Hyundai


Asian MVP Lee Keun-ho said yesterday that his club Ulsan Hyundai is trying to put talk of a potential matchup with Chelsea of the English Premier League aside, understanding how challenging it will be to get past the first opponent, Monterrey of Mexico.

“Many eyes are already on our possible match against Chelsea and our players are also looking forward to it,” Lee said during a press conference in Tokyo.

“But there is a game before that and we will focus all of our energy on the first game and will try to be able to play a second game against Chelsea.”

Ulsan, the winner of the 2012 Asian Football Confederation Champions League, will face the winners of the Concacaf Champions League in Tokyo on Sunday in its first game of the FIFA Club World Cup, the annual competition among the best clubs from each continent.

Ulsan is the fourth K-League team to advance to the elite international tournament. The Jeonbuk Motors, Pohang Steelers and Seongnam Chunma earned a berth to the Club World Cup in 2006, 2009 and 2010, respectively.

Ulsan is seeking to surpass the third-place finish by the Steelers in 2009, the best performance in the event by a Korean challenger.

The Steelers reached the semifinal with an easy path, beating Mazembe of Congo 2-1. It lost to Estudiantes of Argentina 2-1 in the semifinal, but beat Atlante of Mexico 4-0 on penalties in the third-place decider.

Ulsan’s journey will be much more difficult with Monterrey called by some a dream team in Latin America.

Many non-Mexican South American players are playing for Monterrey, including Humberto Suazo, a Chilean forward, and Cesar Delgado, a former Argentine national team member, who have mounted a forcible offense on the attack alongside Aldo de Nigris, a Mexican national team striker.

Walter Ayovi of Ecuador and Neri Cardozo of Argentina are also in the midfield.

Lee said the Mexican club has a formidable attack, but he still expressed confidence in going up against them.

“I know Monterrey is a team of players with good individual skill,” the 27-year-old midfielder said. “When I saw the videos of their games, they were surely superior in technique and are small but speedy.

“But I think we can match them with our teamwork.”

Ulsan coach Kim Ho-gon was more cautious and said he will deploy his best resources for the first game.

“I know the team is very strong,” Kim said. “Their foreign players are strong for their respective national teams. Some members of the Mexican national team are also included. They are stable both on defense and offense, good at individual skill and are high in FIFA rankings.

“But football is unpredictable and some interesting events can occur depending on circumstance. That is football. We will play a good match and will do our best in order to show a new aspect of Korean football.”

Kim said that winning the first game will already leave a strong impression about Korea and Asia as a whole.

If Ulsan beats Monterrey, it will be the third consecutive Korean club to make the semifinal of the Club World Cup.

The Chunma also reached the semifinal in 2010 by routing Al-Wahda of United Arab Emirates 4-1 before getting crushed by Inter Milan 3-0 in the semifinal. The Seongnam club suffered a 4-2 loss to Internacional of Brazil in the third-place decider and settled for fourth.