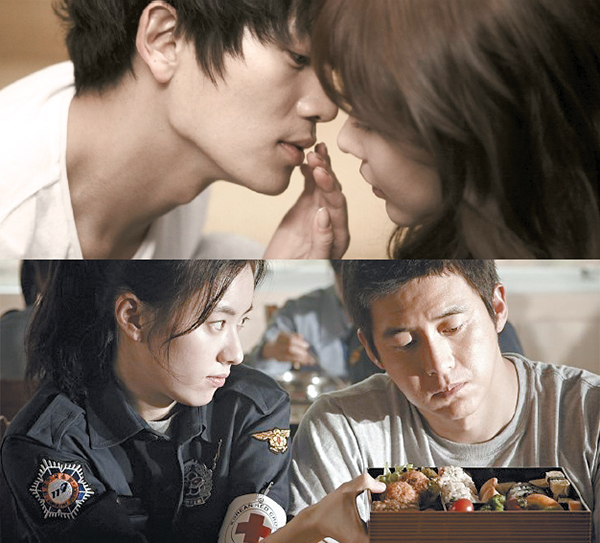 Top: “My PS Partner” tells the story of Yoon Jeong and Hyun Seung, who meet after Yoon has phone sex with the wrong number. Above: “Love 911” centers on the romance of a veteran firefighter and medical first responder. Provided by CJ E&M and NEW


Meet-cutes - adorable or amusing ways in which future romantic couples meet for the first time - are an essential pillar of fuzzy romantic comedies. In some films, the characters fall in love at first sight when they bump into each other on a train or when one character slips, only to be helped up by “the one.”

If you have grown tired of typical meet-cutes, the new film “My PS Partner” will come as a refreshing surprise. In Byun Sung-hun’s latest feature that hit theaters yesterday, the main characters fall in love in an unusual and raunchy way - accidental phone sex.

The call by Yoon Jeong (Kim Ah-joong) was intended for her boyfriend, but she dialed the wrong number and began speaking dirty to a complete stranger, Hyun Seung (Ji Sung).

She made the call in a desperate attempt to get the attention of her boyfriend, whom she had grown distant from over time. Yoon Jeong and Hyun Seung feel an immediate connection through the brief conversation over the phone as both are struggling with relationships.

Yoon Jeong, a dependent, love-starved heroine, constantly thinks of her boyfriend and looks forward to a marriage proposal. But her boyfriend seems to be moving in the other direction, leaving Yoon Jeong alone and lonely.

Hyung Seung still has feelings for his ex-girlfriend, who is already dating a rich, handsome man.

With their hearts torn to pieces, Yoon Jeong and Hyung Seung begin consoling each other and finally decide to meet face to face.

As the title suggests, the sexual content in the film is certainly very graphic, with a number of sex scenes with nudity, not to mention the catalogue of risque, sometimes revealing, sexual jokes.

The director says he tried to keep it authentic by using conversations he has had with his friends over drinks.

“The characters’ names are all my friends’ names,” Byun said. “The racy dialogues in the movie are all based on alcohol-infused talks with my friends. Of course, I toned it down.”

Despite the restrained version of his casual conversation, the expletive content appears to have been a challenge for the actors and actresses.

“The dialogue was sometimes so vulgar that I couldn’t keep my head up because I was so embarrassed when I practiced one-on-one readings before shooting,” said Kim Ah-joong. “I should spend more time practicing and sharing thoughts with the director.

“But other colleagues were very nice to me and cheered me up. So, I shrugged off the stigma and started telling dirty jokes without any script at one point.”

Ji Sung was in the same boat as the 30-year-old actress.

“Every bed scene was quite difficult for me,” said the 35-year-old actor who makes his silver screen debut in the film.

“I’ve long dreamed of performing in romantic comedies after I watched the U.S. film ‘Love and Other Drugs.’ And I’ve always wanted to perform in a movie that shows a romantic relationship in a realistic manner,” Ji added.

“My PS Partner” is destined to generate a lot of attention for its provocative title (featuring acronym of phone sex) and nudity, but one should not miss the subtle description of women in their late 20s.

“I want to display an ordinary woman who becomes extremely conscious about marriage and becomes increasingly dependent on her boyfriend as a result,” Kim said.

“But most men feel pressured by the customs and the relationship becomes more unstable.”

If you’re not in the mood for steamy sex scenes but still need your rom-com fix, turn to the more conventional film “Love 911” by Jung Ki-hoon, which is slated to hit theaters Dec. 19.

The movie tells the story of a firefighter named Kang Il (Go Soo) who lost his wife while saving others from a fire. He runs into Mi Soo (Han Hyo-joo), who faces trouble in her life because of medical malpractice.

They meet again at the scene of an accident as Mi Soo works as a medical first responder who accompanies the firefighters. The melodrama explores how the two, who have their mental wounds of their own, work through their troubles, healing each others’ painful memories.

Director Jeong has depicted a similar recovery process in the past in his previous work “Goodbye Mom” (2009). The family drama explores the tumultuous relationship between mother and daughter and shows how they mended their fences.

“I seek to offer some comfort to people whenever I make a movie,” the director said. “I hope this movie will also give hope to some viewers.”