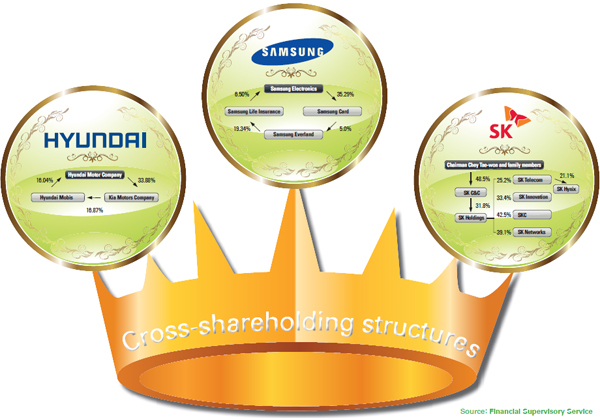 How to best restructure the corporate governance of local conglomerates has become a hot-button topic amid growing calls for “economic democratization” from the political community.

Some 43 of the 50 largest businesses, or 84 percent, are currently led by family members of the founders, according to the Fair Trade Commission (FTC). This is much higher than in the United States, Japan and many European countries.

Including the three, a total of 30 largest businesses accounted for 95 percent of the country’s GDP in 2011, wielding a significant influence over the national economy.

As such, the founding families’ business management style has become part of the mainstream in Korea, which is often described as speedy, efficient and good at overcoming crises.

In the wake of the U.S.-triggered financial crisis in 2008, Samsung’s owner-centered crisis management was highly praised by business experts overseas. As soon as he returned to the company in 2010, the Samsung chief showed the world that it is still the No. 1 electronics maker.

Globally, Samsung has become one of the top two smartphone makers along with Apple. It reaped a record high operating profit of 8.1 trillion won ($7.5 billion) in the third quarter this year, the largest in its 43-year history.

However, anti-Samsung sentiment has always been on the radar domestically, to a greater or lesser degree. When Lee temporarily left the company in 2009 to take responsibility for hiding shares of affiliates under borrowed-name accounts and avoiding taxes, he pledged to reform the cross-shareholding structure of the group by using a holding company. However, this remains an unfulfilled pledge.

Business analysts say the foremost problem of having an owner-centered corporate governance structure is the room it leaves for dictatorial management practices.

“Controlling the management of, and reshuffles at, group subsidiaries despite only holding a less than 1 percent stake in them is like an act of imperialism,” said Wee Pyeong-ryang, a researcher at the Economic Reform Research Institute.

According to the FTC, the owners of the country’s 43 largest conglomerates hold fewer percentages of shares in their respective groups now than in the past. Samsung Chairman Lee holds a 0.02 percent interest in his group, while Lotte Chairman Shin Kyuk-ho controls just 0.52 percent of his group. But the families’ dominance continues to grow.

But the complex shareholding structures of major conglomerates have traditionally been a hallmark of big businesses in Korea, the FTC said.

One of the reasons why cross-shareholding has taken root in the country is because stakeholders’ dividends are relatively small compared to other countries.

Liberal lawmaker Shim Sang-jeong said the owner-centered corporate governance structure may have been effective when Korea was a developing country in terms of employment and economic growth. However, in this era of global uncertainty, owners need to cooperate with other parties to overcome risks, she said.

Those who advocate the family-run management style say companies that adopt it generally perform very well.

“Outside CEOs refrain from making long-term investments, because it is less likely that they will see any outcome during their tenure,” said Hwang In-hak, a researcher at Korea Economic Research Institute.

According to the Federation of Korean Industries, family-run businesses achieve 2 to 3 percent more sales than companies run by outside CEOs. They also invest twice as much in employment and research and development.

The issue first flared up in 1997, when many local businesses went belly up in the wake of the Asian financial crisis. As companies grew in size with considerable financing in a short span of time, transparency in terms of how the money was being handled became an issue.

Former Hanbo Group Chairman Jeong Tae-soo shocked the nation at the time by referring to his executives and employees as “servants.” Although it ranked as the nation’s 14th-largest conglomerate, it went bankrupt because of the chairman’s improper links with politicians and debts amounting to 5.7 trillion won. Its collapse was only the beginning of a string of corporate bankruptcies at the time.

Now the debate has resurfaced with a vengeance ahead of the impending power transfer from a pro-chaebol administration to a government that, regardless of its political bias, is likely to be decidedly more anti-big business.

Opposition party politicians, who say inequality has grown significantly because of the current Lee Myung-bak administration’s favoring of conglomerates, opine about the need for economic democracy, a level playing field and an environment where small businesses have a better chance of surviving cut-throat competition from larger players.

Amid the anti-chaebol atmosphere, in November, Chairman Chey Tae-won of SK Group, the country’s third-largest family-run conglomerate, said he will disperse his power to CEOs of the group’s subsidiaries from Jan. 1.

Under the plan, CEOs of SK subsidiaries will be granted enhanced control of their companies. A new board of the CEOs will be formed and given the power to oversee important businesses of each subsidiary. The board will discuss projects that might affect the group’s business portfolio and profitability.

However, some business analysts say SK also wants to distance itself from the owner. Chey is on trial for allegedly embezzling 180 billion won from corporate coffers.

Kim Hyun-chul, a professor at Seoul National University, said in a lecture recently that Korea’s business management can be likened to imperialism, while corporate Japan resembles an ancient landlord culture. He meant that Korean business owners’ absolute power reaches every corner of their companies, while Japanese owners don’t directly intervene in management.

Kim said Japan, which until recently dominated the global electronics market for 40 years, was shocked by Samsung’s rise. Samsung alone outstripped the combined profits of nine leading Japanese electronics makers in the second quarter of 2009, he said.

The Japanese companies wanted to know how and why this happened as there was no obvious difference in their corporate governance. The Japanese had the same owner-led system as Samsung. Japanese conglomerates owned around 100 affiliates each, far more than the 60 to 70 owned by their Korean counterparts. In Japan, it is a common business practice for units to invest in each other, but this is banned in Korea.

Kim found the only key difference was the role the owners played. Korean owners like Samsung Chairman Lee and Hyundai Motor Chairman Chung take control of their companies’ major business operations from the front line, while their Japanese counterparts tend to assign their work to outside CEOs.

In contrast, Germany has a two-tier board system that prioritizes transparency in corporate governance, according to a study by Kim Ki-won, a professor at Korea National Open University.

Under German law, a company should have an oversight board and a management board. The former comprises representatives of both employees and the owner’s family, and part of its job is appointing members of the management board.

Banning the controversial cross-shareholding practice could cause the nation’s GDP to slide 2 percent, according to Korea University Prof. Oh Jung-guen. He made the comments at a recent forum held by the Korea Chamber of Commerce and Industry in Seoul.

Outlawing the practice would require large conglomerates to withdraw huge sums of money they have invested in their affiliates, incurring costs of at least 14.6 trillion, Oh argued. The ramifications of such a move on the real economy could be extensive, he said, leading to a contraction in business investments and job cuts.

“If cross-shareholding is prohibited, the largest shareholders of conglomerates may lose stability in management as they will become more exposed to the risk of hostile mergers and acquisitions,” he added.

Yu Ji-soo, the dean of Kookmin University, said cross-shareholding is a common practice globally and not something that should be demonized.

“Top automakers like Renault-Nissan and Toyota were formed based on this structure,” Yu said. Volkswagen and Ford give dominant shareholders greater voting power to help protect their ownership, he added.

“The owner-centered management of Korean automakers has its advantages, such as the swift execution of policies, and being able to make bold investments from a long-term perspective,” he said. “[Politicians] need to help create a business environment that can maximize these advantages.”

Moves to regulate the governance structure of local conglomerates should be aimed at cracking down on a limited number of shareholders whose greed compromises the interests of the majority, rather than banning the cross-shareholding practice itself, said Lee Sang-seung at Seoul National University.

Looking to the CEO era

“Owners often damage their corporate values as they make decisions based on what personal gains they can obtain,” said Lee Won-il, the president of Alliantz Global Investors. “There are U.S. companies that have seen their stock prices surge 10 percent after they transformed their corporate governance structures from owner-centered to other forms.”

Lee said that even though companies like Samsung Electronics, Hyundai Motor and LG Chem can post record profits owing to the positive effects of being run by their owners, improved corporate governance structures could have made them more lucrative.

“Korean businesses have entered a transitional period, shifting from management led by owners to one that considers shareholders more,” Lee said. “In the next 20 to 30 years, CEO-led management will take root in the Korean business community.”