Delta to grow Incheon as its major airport

Delta to grow Incheon as its major airport 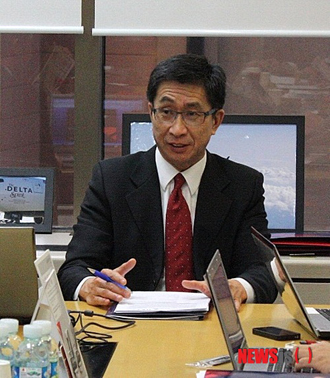 Delta currently uses Japan’s Narita International Airport in Tokyo as its main hub in the region but is mulling making the switch as Narita has become oversaturated with flights, he added. He said Delta CEO Richard Anderson visited Incheon this summer for an inspection tour.

“Geographically, Incheon is located in a very good place and facility-wise, Incheon is the best,” Chang said at the press conference in Seoul yesterday “We’re looking at every possible way to develop Incheon as a major airport in the near future.”

The 60-year-old Taiwanese, who has been in the position since 2010, described Korea as “a big star not only in Asia but also in the international arena” and said the airline has a “long-term commitment to grow in Korea.”

Delta offers two direct international flights in the country - Incheon to Detroit and Incheon to Tokyo - but Chang said it may expand direct flights to the U.S. as demand is growing.

“We will consider the business demand to determine which destinations [to add],” he said, adding that “we need to be profit-driven.”

Chang said the airline is trying its best to satisfy Korean customers. Delta, which has forged an alliance with Korean Air under the SkyTeam brand, has injected $3 billion to improve its customer service, such as installing full flat-bed seats in business-class cabins. Chang said the airline plans to recruit more Korean flight attendants, offer more Korean meals and upgrade its in-flight entertainment with Korean movies and subtitles.

“The service standard in Korea is very high and we are taking measure to improve it,” Chang said.

American Airlines last month announced that it will fly between Incheon and Dallas Forthworth, beginning in May. But Chang said that Delta, the second-largest U.S. airline by revenue after United Continental, welcomes the competition.