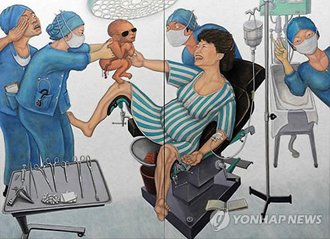 Prosecutors have launched an investigation into a South Korean artist who painted a controversial picture of the female conservative presidential candidate giving birth to her father, late President Park Chung-hee, officials said Thursday.

The painting posted on his personal blog shows the never-married 60-year-old Park giving birth to a baby who looks like her assassinated father with his signature sunglasses in a hospital maternity ward, surrounded by doctors and nurses. 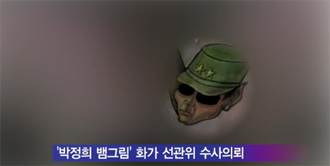 Prosecutors said they will review the materials and decide whether to summon the artist for questioning.

The painting has stirred controversy among ruling party officials who saw it as aimed at tarnishing their candidate's reputation ahead of the tight race.

In media interviews, Hong, 57, defended his work, saying it was a satirical comment about South Korean voters who still miss the time of Park Chung-hee's rule.

The Army general-turned-president has been a rallying point for conservatives who respect his accomplishment in rapid economic development, while he is criticized by liberals for suppression of the nation's nascent democratic movement in the 1970s. (Yonhap)