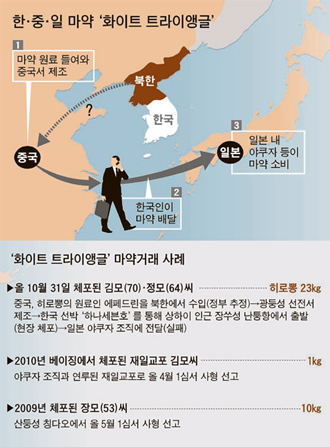 Two Korean sailors who attempted to smuggle 23 kilograms (50.7 pounds) of drugs were caught by the Public Security Bureau in China.

According to the government sources, two sailors, identified as surname Kim, 70, and Jeong, 64, were arrested by Chinese officers at Nantong Port in Shanghai on Oct. 31.

The government said it is the single largest drug smuggling case ever attempted by Koreans overseas.

The government said the suspects had 23 kilos of methamphetamine thought to be manufactured in Shenzhen, China. They were trying to smuggle the drug into Japan when they were caught.

“About 770,000 people could get high with that much methamphetamine,” a spokesman of the Ministry of Foreign Affairs and Trade told the JoongAng Ilbo.

“The drugs are worth about 77 billion won ($71.1 million). Considering their ages, we judge that the two suspects are veteran drug smugglers.”

Drug users take an average of 30 milligrams of methamphetamine in one dose and its market price in the region is about 100,000 won per dose.

Drug smuggling is punishable by death in China, regardless of nationality, if found to be smuggling more than 1 kilogram of methamphetamine.

The Chinese government has been taking stronger action against these “triangle” type drug operations - manufactured in China, distributed through Korea and illegally consumed in Japan.

The government said three Koreans have been sentenced to death by Chinese courts for drug smuggling.

In August, a court in Yanbian sentenced to death a 51-year-old Korean man surnamed Shin who was caught traveling from Changchun to Shenyang with 10.3 kilos of methamphetamine in July 2009.

If the death sentence is confirmed in the last trial, the execution will take place one year later. A Korean man surnamed Shin was executed in 2001.

“We can’t guarantee that we can save their lives because the quantity of drugs is so high,” a spokesman of the Foreign Affairs Ministry said. “But we will take our best shot at bringing them home.”

It added that a total of 346 Koreans are currently jailed in China and 95, or 27.4 percent, of the prisoners are there on charges related to dealing drugs.

The government, however, expected that they can trace the supply sources of ephedrine, one of the key ingredients used in manufacturing methamphetamine.

The government suspects that these drug dealers are possibly related to the North Korean government as they are generating foreign income by producing and selling ephedrine.

“The North began manufacturing methamphetamine in 1996,” said Gwak Byeong-tae, an official from the Korea Food and Drug Administration. “Two North Korean vessels disguised as a fishing boat delivering 100 kilos of methamphetamine to Japanese yakuza were caught by Japanese police at Tottori in April, 1994.”