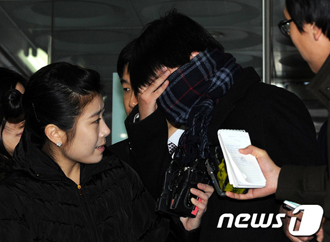 An investigation into the leaked photo of a woman surnamed Yoon who is suspected of having sex with a junior prosecutor to cover up her theft case has turned up new evidence.

Police said yesterday officials in the prosecution might have leaked the woman’s photo on the Internet.

Police, however, said they have agreed to halt their investigation into the case and wait until the prosecution finishes its own investigation.

The Seocho Police Precinct said yesterday they found 24 officials in the prosecution (10 prosecutors, 10 investigators and four civil servants) who accessed the Crime Information Management System and opened up Yoon’s profile containing her picture, after tracing their IP addresses.

The police judge that one of these officials might have leaked the woman’s photo. The police said that the two leaked photos are from Yoon’s driver’s license and resident registration card.

The photos were leaked and spread onto the Internet, where they went viral as this has been a high-profile scandal.

The police said two police officers also accessed Yoon’s profile, but concluded that the two didn’t leak the photo because they are the investigators who were in charge for Yoon’s theft case and the time they accessed the database was prior to November.

On Nov. 25, prosecutors arrested a junior colleague surnamed Jeon for allegedly having sex with Yoon, 43, in his office and at a motel while investigating her on 15 counts of stealing from department stores and stealing goods worth around 4.5 million won ($4,145).

Last week, the police said they launched an investigation into the photos after receiving a request from her attorney.

“We do not worry about destruction of evidence because we believe that they will keep their promise,” a spokesman of the police told reporters. “We will judge whether an additional investigation is necessary based on the prosecution’s report that will be handed over to us.”

Some officials in the police say they are taking a weak position with the prosecutors because they are worried about criticism for causing another conflict if they don’t back off the case.