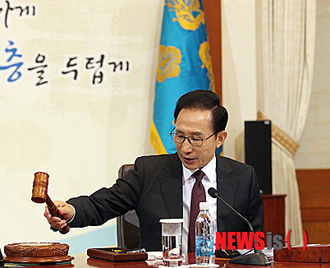 The metal workers' union said Thursday it has filed a compensation suit against President Lee Myung-bak for his remarks which they claim infringed upon workers' rights.

The Korea Metal Workers' Union (KMWU) argued in a news conference that Lee denied workers' constitutional rights to strike when he criticized workers of Mando Corp. for walking out in July despite their relatively high salaries.

KMWU is the country's largest industrial union claiming about 150,000 members in the automobile, steel, machinery and shipping sectors.

The union alleges that Lee, during a government meeting in July, described the Mando union as having workers with an average income of 95 million won (US$87,678) and lamented that South Korea is the only country in the world where an "aristocratic" union like Mando's goes on strike to demand better working conditions.

Earlier in the day, the KMWU, the Mando union and three workers of the company submitted a complaint to the Seoul Central District Court, seeking compensation of 20.3 million in total from Lee, KMWU officials said.