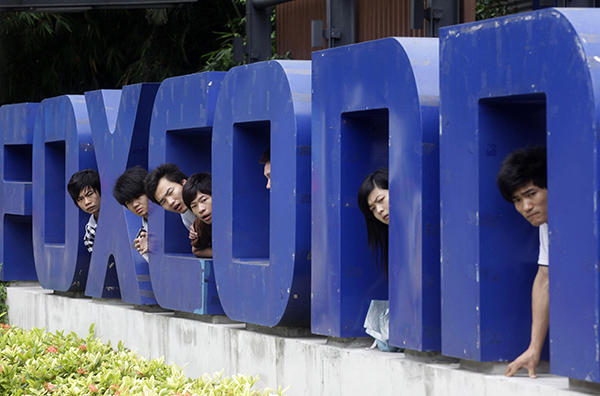 Workers look on from a Foxconn logo near the gate of a Foxconn factory in Guangdong Province, China, in this file picture taken May 29, 2010. Apple plans to spend more than 100 million dollar next year on building Mac computers in the U.S., shifting a small portion of manufacturing away from China. [REUTERS/YONHAP]


Apple plans to spend more than $100 million next year on building Mac computers in the U.S., shifting a small portion of manufacturing away from China, the country that has handled assembly of its products for years.

“Next year we’re going to bring some production to the U.S.,” Chief Executive Officer Tim Cook said in an interview with Bloomberg Businessweek. “This doesn’t mean that Apple will do it ourselves, but we’ll be working with people and we’ll be investing our money.”

Apple, which until the late 1990s made and assembled many products in the U.S., moved manufacturing to Asia to take advantage of lower labor costs. The planned investment makes up a sliver of Apple’s $121.3 billion in cash, and probably won’t meaningfully affect profit margins. Still, it reflects pressure on companies to create even a modest number of domestic jobs as the unemployment rate hovers near 8 percent and the economy rebounds from the recession that ended in 2009.

Cook discussed the investment plans in an interview that touched on his relationship with Apple co-founder Steve Jobs, the recent dismissal of senior executives and the company’s competition with Samsung Electronics.

While Cook didn’t outline where the manufacturing would move or how much would be produced in the U.S., he said the company will work with partners and that the operations would include more than just final assembly.

Many of the parts that go into the iPhone and iPad already are made in the U.S. This includes the display glass, which is made in Kentucky, Cook said.

Apple also has created jobs in the mobile-software industry through the introduction of the iPhone in 2007, which fueled an explosion in creation of applications, he said.

Besides building a new headquarters in Cupertino, California, Apple is working on a campus in Austin, Texas, Cook said. The company is building new data centers in Nevada and Oregon, while expanding an existing one in Maiden, North Carolina, he said.

Before shifting work abroad, Apple had handled manufacturing in such locations as as Elk Grove, California, near Sacramento, and Fountain, Colorado, near Colorado Springs.

Mac desktop and laptop computers - once Apple’s cornerstone - have been dwarfed by the iPhone and iPad more recently. With sales of $23.2 billion on 18.2 million units last year, Macs accounted for just 15 percent of total revenue. The device is currently manufactured mostly in China.

Apple and its manufacturing partner Foxconn Technology Group have faced criticism from labor- and worker-rights groups for the conditions at facilities where Apple products are made. Cook defended Apple’s practices, including enlisting the Fair Labor Association to audit Foxconn’s factories.

“We’re doing a number of things that I think are really great, really different, and industry-leading,” Cook said. “No one is looking at this as deeply as we are or going as deep in the supply chain.”

Foxconn itself has operations in the U.S. The company, which has 1.5 million of its global 1.6 million workforce in China, runs facilities in California as well as Houston, said Louis Woo, a spokesman. U.S. factories mostly make servers while larger operations in Mexico assemble consumer electronics such as TVs, he said. Woo declined to comment on Apple’s plans or specific clients and was unable to immediately say how many employees Foxconn has in the U.S.

Other companies that have said they’ll shift production back to the U.S. from overseas include Caterpillar and General Electric, Google this year delayed a wireless media device that it had pledged to build in California.

In the interview, Cook also addressed his recent decision to revamp Apple’s management team to improve cooperation among groups. Senior Vice President Scott Forstall, a main architect of the iPhone software that’s now on more than 400 million Apple devices, was fired in October amid complaints that he clashed with other senior executives.

“These moves take collaboration to a whole different level,” Cook said, without discussing specific executives. “We already were - to use an industry phrase that I don’t like - best of breed. But it takes us to a whole new level. So that’s what it’s all about.”

Cook also said Apple has a complicated relationship with Samsung, one of Apple’s biggest component suppliers and its chief rival in the smartphone and tablet markets. Bloomberg