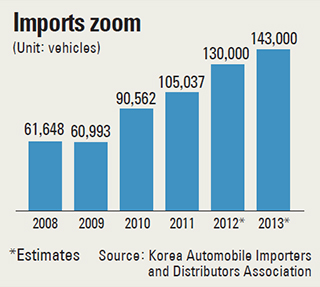 Sales of imported cars in Korea will grow about 8 percent next year, according to the Korea Automobile Importers and Distributors Association.

According to Kaida, additional tariff cuts because of free trade deals with the United States and the European Union and the introduction of new models and auto brands, such as Fiat, will contribute to the growing demand for imported cars.

The trade pacts with the U.S. and EU, which went into effect early this year and last year, respectively, phase out tariffs on cars over a period of three to five years. Cars made in Europe will have an import tariff of 1.6 percent in 2013, half of what it is this year. 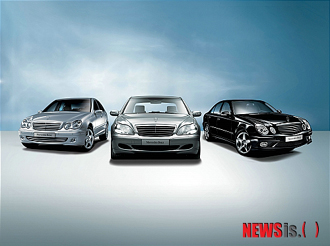 However, Kaida said that the 2013 sales growth rate will be smaller than this year - which is expected to be 20 percent - due to sluggish domestic demand affected by economic uncertainties both at home and abroad.

Imported cars have enjoyed brisk sales this year thanks to a special tax reduction.

Kaida said that the steady sales of cars with 2.0-liter engines or lower will continue as well as sales of diesels and hybrid models.

“The imported market next year will not be like this year, but people’s perceptions of foreign-made cars are getting better,” said Yoon Dae-sung, an executive managing director at Kaida. “Since small-sized cars and less expensive cars are coming to Korea, the market growth will be likely to continue.”