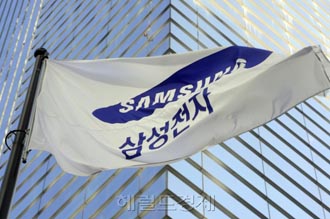 After announcing its annual upper-level reshuffle on Wednesday, Korea’s top conglomerate said yesterday that 485 employees have been promoted.

Forty-eight have earned vice president positions, while 102 have been moved up to executive director and 335 have taken managing director positions.

The total is less than last year, when 501 employees were moved up, but Samsung said that this year marks the largest number of new executives since 335 employees left their non-executive level positions. This surpasses last year’s figure of 318.

In addition, Samsung said 74 received “advanced promotions,” which is also the largest number in corporate history.

Some new executives were promoted as quickly as in one year. Usually, it takes about four years to reach the executive level from general department manager.

Industry watchers said that this year’s reshuffle shows the conglomerate is pushing to make a “younger Samsung,” following the promotion of Jay Y. Lee, the only son of Chairman Lee Kun-hee. The 44-year-old was promoted to vice chairman of the group on Wednesday.

Along with the younger Lee, these new executives are expected to tackle urgent tasks, such as the patent war against Apple, and develop a new source of future growth.

Among the group’s affiliates, Samsung Electronics, the world’s No. 1 producer of smartphones, computer memory chips and televisions, promoted the highest number of executives with 226.

The tech giant accounted for nearly 80 percent of the group’s total sales. It’s expected to reach a record-high 200 trillion won ($184 billion) in sales and an operating profit of 25 trillion won by the end of this year.

Department leaders from its mobile communications division, in particular, accounted for a significant number of promotions. Of the 74 advanced-promoted executives, 16, or 22 percent, came from this division.

Lee Young-hee, the executive director of smartphone marketing, became Samsung Electronics’ second-ever female vice president after Shim Su-ok, mainly for her contribution to the success of Samsung’s Galaxy smartphones and improved awareness of the brand.

Analysts speculate that more women will be promoted in the near future following Chairman Lee’s idea of reinforcing competitiveness in various fields.

A total of nine foreigners also entered the executive level in this year’s reshuffle, which also marked the biggest number to date.

Tim Baxter, the head of Samsung Electronics America, improved his position from executive director to vice president within Samsung Group, becoming the first foreigner to take the position.