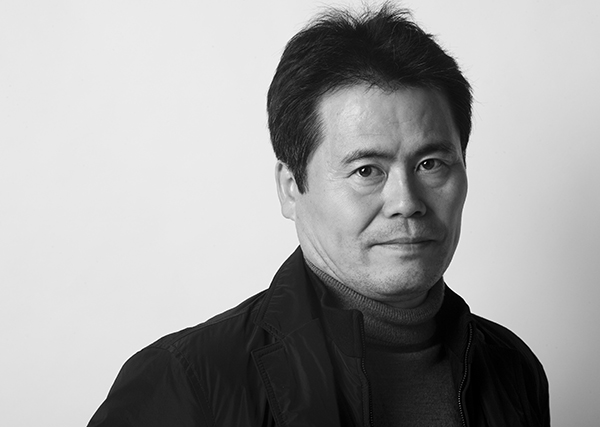 
“Pine trees vary in different regions; the trees in Jeolla and on the west coast, with trunks bent and askew, are good to paint, whereas the trees in Gyeongsang are better for photographing as they are too tall.”

This is what artist Moon Bong-sun, 51, said in a press preview of his solo show at the Seoul Museum in Buam-dong, central Seoul, on Tuesday. The exhibition, which consists of about 20 large-size paintings depicting pine trees in various parts of Korea, opens next Wednesday.

Moon is “one of the few artists who paint in Korean traditional methods but in a modern sense at the same time,” said Yi Joo-heon, the museum director and an art critic.

Moon’s black-ink paintings with white empty spaces on display are on the tradition of muninhwa, or simple paintings with philosophical meanings made by aristocratic scholars in the Joseon era (1392-1910). But the compositions and depictions of pine needles in Moon’s paintings are different from muninhwa and have some common points with Western paintings or silhouettes.

It is because Moon’s paintings are all based on the pine trees he saw in person and sketched, whereas traditional muninhwa, a conceptual painting, was painted based on the ideal images of Joseon scholars.

He has traveled all over the country from Jeju Island in the South Sea to Gangwon, northeast of Seoul, to visit various pine forests.

“I don’t carry a camera with me when I visit pine forests, whereas many contemporary artists take photos of landscapes to paint them,” he said, pointing to his sketch books, which are also part of the exhibit.

“I just sketch. For me, it is easier and faster to sketch pine trees than to take photos of them,” he said. 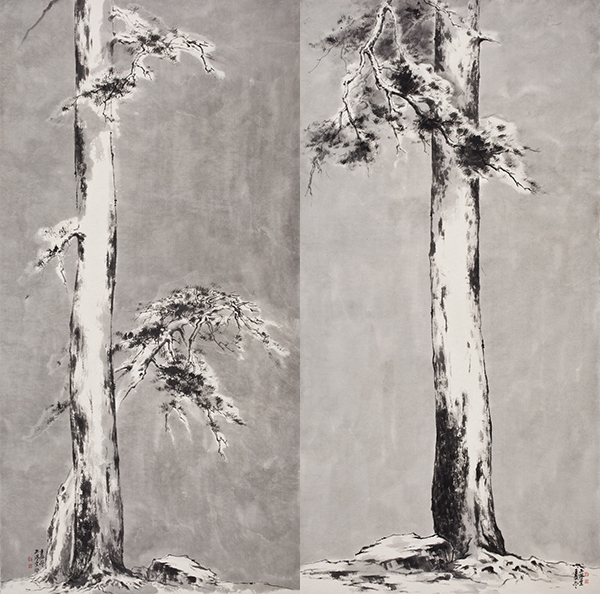 
This is possible because Moon polished his cursive script, or caoshu, in China, according to Lee. Caoshu is a style of calligraphy where the letters are written very quickly in flowing strokes.

Not only his sketches but also his paintings based on the sketches have some qualities of caoshu in the brush strokes, Lee said.

Still, Joseon muninhwa is an important source of his inspiration, Moon said. Among them, “Seolsongdo” (“The Painting of Pine Trees in Snow”) by Lee In-sang, a poet, painter and calligrapher of the 18th century, is Moon’s favorite older painting, he said.

“Inspired by it, I also painted pine trees in snow, and two of them are in the show,” he said. “You will see the trunks covered with snow have a shining white color. I got the color from fine rice flour mixed with glue. The method was also inspired by Lee In-sang’s painting method. So even if the paper discolors over time, the snow on the tree trunk will remain white.”

The exhibit also includes a painting of the 600-year-old pine tree near Seokpajeong, a hanok (traditional Korean house) that was once the summer house of King Gojong’s father, behind the museum.