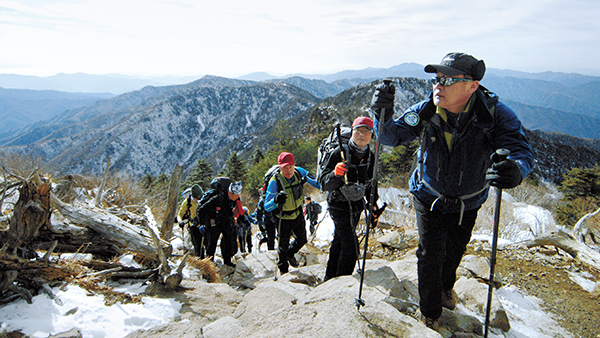 Park Jae-seok (right), president and CEO of S&T Dynamics, leads a group of employees to the top of Mount Jiri during the final hike of their five-year-long series of expeditions. Provided by the company


Park Jae-seok, president and CEO of S&T Dynamics, led his employees through an almost five-year series of hiking expeditions through the Baekdudaegan, a mountain range that stretches across most of the Korean Peninsula, in an attempt to show them there is nothing they “cannot accomplish.”

Over 170 employees of S&T Dynamics climbed to the top of Mount Jiri last weekend and celebrated the end of their half decade of hiking throughout the country.

They even prepared food to commemorate the accomplishment at the summit, along with a miniature version of the company’s 1,500 horsepower transmitter for a K-2 tank that was brought for luck to promote the “long-lasting success” of the company and national defense. They buried the model near the top of the mountain.

The entire journey took four years and eight months to complete. A total distance of 850.49 kilometers (530 miles) was walked with many of the company’s 1,130 employees taking part.

Park first suggested that the company take part in the hiking and led his employees through the trails.

He said in a meeting at the end of 2007 that the global financial crisis would be prolonged, so the company needed to have some determined spirit in order to overcome the crisis.

The first cross-country trek started from Jinbu Ridge of Seorak Mountain on April 19, 2008, and ended at Misi Ridge, a 15.6-kilometer trail.

Since then, the company workers have hiked a number of mountains at least once a month on the weekends, including Mount Odae, Mount Taebaek, Mount Sobaek, Mount Sokri, Mount Deokgyu and Mount Jiri.

Employees pledged to persevere and press on, chanting their slogan “We can do it” along the way.

Park said he enjoyed the opportunity to connect with the group of employees as they traveled together.

“There is no hierarchy when you ride a bus with a group in your trekking suit, walk the steep trails and then eat pork belly with a shot of soju together,” Park said. “Communication was more active and trust has been built.”

Perhaps this communication helped smooth the relationship between labor and management. In July, around three years after the cross country treks started, management at the company and the labor union settled wage bargaining without any disputes or strikes for the first time.

This comes nine years after the company acquired Tongil Heavy Industries in 2003, which was known for its chronic labor-management disputes.

The company was awarded the National Quality Grand Prix, the highest prize a business can get from the Korean Standards Association for accomplishing considerable performance in quality improvement, cost-cutting and productivity.