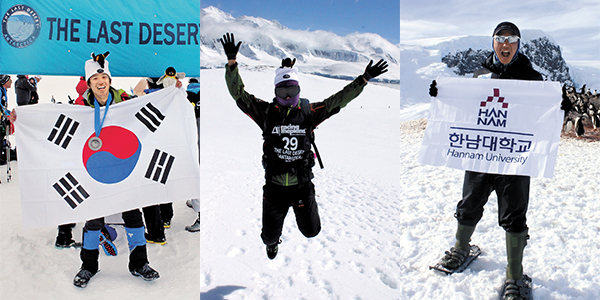 
Three Korean college students completed a 250-kilometer (155-mile) marathon walking course covering 10 islands, including King George Island off the cost of Antarctica, on Monday in a contest known as the Last Desert Antarctica, organized by Racing the Planet, a private firm that runs four endurance footraces.

Yun Seong-chul of Dongguk University in Seoul, Kim Sang-hyun of Yeungnam University in North Gyeongsang and Choi Kyu-young of Hannam University in Daejeon participated in the seven-day race, walking over 40 kilometers a day in the frozen lands of Antarctica.

Using a polar expedition ship as the base for the race, 55 contestants from 28 countries traveled from one location to another on the Antarctic Peninsula and offshore islands for the seven days, bearing freezing temperatures that dropped down to minus 20 degrees Celsius (minus 4 degrees Fahrenheit).

Recognized as one of the four leading endurance footraces in the world by Time magazine, only those who have already completed three endurance races in Chile’s Atacama Desert, China’s Gobi Desert and Egypt’s Sahara Desert are qualified to try out for the ultimate Antarctica race.

The Korean trio all achieved the feat by completing the four races within two years.

The 22-year-old student Yun set a record for the youngest person to have completed the “Four Desert” races. The student at Dongguk University gained public attention by receiving donations to participate in the Antarctica marathon through social networking sites.

The youngest challenger received funds of 3.1 million won ($2,860) from some 90 Internet users to sponsor his race.

Yun, who finished the 250-kilometer race wearing a badge with the names of his sponsors engraved on it, made a video clip during the race thanking those who helped him reach his goal in Antarctica.

Kim and Choi were also recognized for having completed the four desert races spanning 1,000 kilometers in total within a year.

“I kept enduring the pain sweeping through my body walking toward the goal, and then I found myself at the finish line,” said Choi.