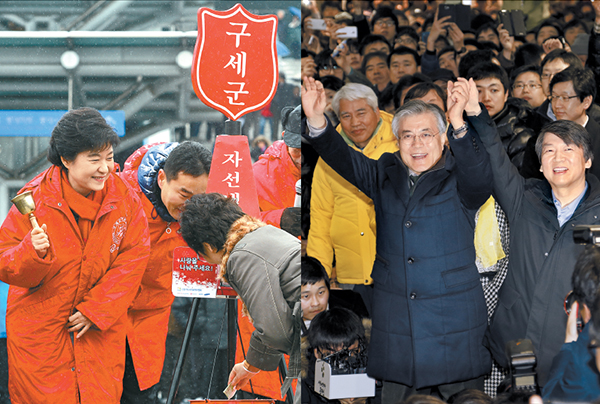 Ahn joined Moon at a campaign stop at the underground plaza of the Lotte Department Store in downtown Busan. Roughly 1,000 people, including reporters, showed up.

The southeastern coastal city is the hometown of both Ahn and Moon.

“I know how big your desire for new politics is,” Ahn said in a speech. “I will make my efforts to realize it.” 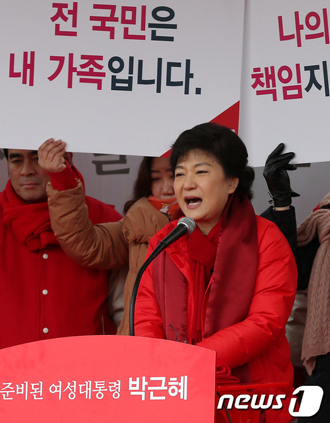 Moon emphasized the need for power to be gained by the opposition.

“Ahn and I came here together,” Moon said. “The two of us have become one. I will accomplish a shifting of power from the ruling party to the opposition. Busan people! The beautiful merger of candidacies has been completed, right?”

It was a marked contrast from the lackluster endorsement Ahn gave Moon after dropping out of the race Nov. 23, frustrated with Moon’s negotiating tactics to combine their candidacies and his party’s dirty tricks.

A poll by private polling company Realmeter showed yesterday that Moon’s approval rating increased from 40.9 percent to 42.8 percent following Ahn’s announcement Thursday that he fully endorsed him and wanted his voters to support him. The approval rating for front-runner Park Geun-hye of the ruling Saenuri Party moved from 51.4 percent on Thursday to 48.9 percent yesterday.

The gap between the two candidates narrowed from 10.5 percent to 6.1 percent.

“Assuming there were 5 percent swing voters, about 2 or 3 percent of them moved to Moon after Ahn’s support,” Lee Taek-soo, head of Realmeter, told the JoongAng Ilbo yesterday. “The rest of the undecided voters could also go to Moon, based on how much Ahn will continue to support Moon.”

Park campaigned in Seoul and Gyeonggi, where analysts say a lot of swing voters remain.

On a snowy day, Park appeared at the Macheon Market in eastern Seoul in a red winter coat. A group of women in their 60s followed Park wherever she went chanting, “Park Geun-hye, president!” Young people tried to take pictures of her. Roughly 1,000 people were at the market, police said.

Although Park didn’t directly mention Ahn and Moon by name, she said it could be a “waste of time” if “people who have different ideologies” get together.

“If people who have different ideologies and thoughts on economic policies and North Korean affairs join forces, they would spend their time fighting each other,” she said. “I guess you remember the Roh Moo-hyun administration. There will be more conflicts and factional fights, just like that time.”

Moon and Ahn disagreed over North Korean affairs during a debate on Nov. 21. Moon said he wanted to resume inter-Korean talks immediately and even work toward a summit. Ahn said he wanted Pyongyang to ensure the safety of tourists at the Mount Kumgang resort before holding a summit.

Meanwhile, a group of Ahn’s supporters said it couldn’t accept Ahn’s support for Moon and publicly declared to split from Ahn. They had hoped Ahn would run as a third candidate in the presidential race even if he couldn’t win.

“Ahn had said he would strive for political reform, but he forgot the pledge and focused solely on a power transition from the ruling party to the opposition,” Jo Yong-gyeong, one of the supporters, said at a press meeting yesterday in central Seoul. “We can’t support him anymore.”

At a luncheon with supporters Tuesday, Ahn reportedly said he “felt ideological differences with Moon,” implying they were about North Korea.