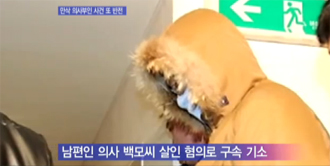 A 32-year-old doctor accused of killing his pregnant wife was sentenced to 20 years in a retrial held yesterday. The Seoul High Court upheld the previous jail sentence.

The case was transferred to the Supreme Court in June, but the court sent it back to the high court, stating the court should clarify the grounds that led them to give the doctor surnamed Baek a 20-year prison term.

In January last year, the doctor, a fourth-year resident at Severance Hospital in Seoul, reported to police that he had discovered his wife dead in a bathtub in their home in Mapo District, western Seoul.

However, he was charged in March for murder after an autopsy concluded that his 29-year-old wife, who was nine-months-pregnant at the time, was strangled to death by Baek and found his DNA under her blood-stained fingernails. She also had bruises on her face and wrist.

In previous trials, the courts said that Baek, who was under severe stress at the time as he botched a medical doctor qualification exam a day earlier, killed his wife after she complained about him excessively playing computer games.

The Supreme Court however said a quarrel between a husband and a wife is common, suggesting the high court reconsider the motivation of the murder.

Baek has claimed that the wife slipped in the bathtub and fell and hurt her neck.

“Based on the bruises and scars around the victim’s neck and jaw, we concluded that someone caused her death,” senior judge Yoon Seok-won of the Seoul High Court said in the ruling, upholding its original verdict.

“We accepted all of the allegations claimed by prosecutors that said the doctor killed his wife in a fit of anger.”
By Kim Ki-hwan, Kwon Sang-soo [sakwon80@joongang.co.kr]