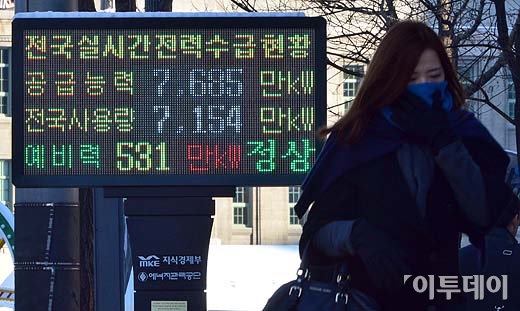 Korea issued the first power alert of the winter season at 11:20 a.m. yesterday as its electricity reserves went below the critical level of 4 million kilowatts and continued below the level for more than 20 minutes.

Power demand was at its peak of 73.29 million kilowatts between 11 a.m. and 12 p.m. with the average electricity reserves at 3.8 million kilowatts, according to the Ministry of Knowledge Economy.

As the mercury dropped to minus 6 degrees Celsius (21.2 degrees Fahrenheit) in Seoul yesterday with light snow almost all day, the power crunch continued.

“We understand that [abstaining from] heating is different from air-conditioning as it is more critically decides a [life or death situation],” said Vice Minister Cho Seok of the Ministry of Knowledge Economy.

“But, because we see a sudden surge of power demand between 10 a.m. and 12 p.m., it will be helpful if individual households refrain from keeping the electric heat on.”

However, the power reserves continued to drop and the ministry again lowered the voltage to save 230,000 kilowatts of electricity.

All of the government’s effort to avoid the power alert was to no avail as the lowest-level alarm was raised.

The country’s power alert is automatically issued when the electricity reserve level stays under 4 million kilowatts for more than 20 minutes.