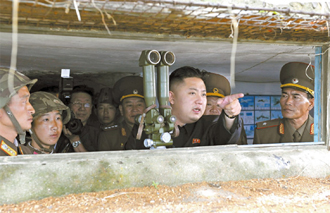 North Korean naval officers responsible for the communist country's deadly sinking of a South Korean warship in 2010 have been awarded a hero's title, a defector claimed Friday.

"The captain, co-captain, chief engineer, and boatswain of the submarine which had attacked the warship Cheonan, were awarded the title of the DPRK (North Korea) hero sometime in Oct., 2010," Ahn Cheol-nam (alias) said during an event held by the Korea Peace Forum.

Ahn, who previously worked at the North Korean cabinet, defected to the South late last year.

"An acquaintance of mine claimed that his son-in-law was the chief engineer of the submarine responsible for the attack on the Cheonan," Ahn said.

According to Ahn, the son-in-law, whose identity was withheld, was promoted to co-captain and received the DPRK hero title after the sinking.

The warship Cheonan sank in waters near the tense western sea border with North Korea on the evening of March 26, 2010, killing 46 sailors aboard. A South Korean-led international investigation later concluded that a North Korean submarine torpedoed the vessel.

The attack, along with the North's shelling of the western border island of Yeonpyeong in November that year, plunged the already-frayed relations between the two sides to their lowest levels in decades. Pyongyang has refused to apologize for the Cheonan's sinking and denies having any involvement in the incident.