Park to appear on cover of Time magazine

Park to appear on cover of Time magazine 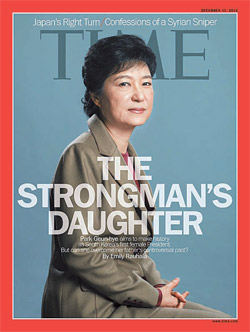 The 60-year-old conservative candidate of the Saenuri Party is a leading contender in the Dec. 19 election, who could become the country's first woman president.

The cover photo of Time's Dec. 17 Asia edition, published on the magazine's Web site, shows Park seated with her head turned to the right to face the camera.

The cover headline reads "The Strongman's Daughter," in reference to Park being a daughter of the late authoritarian president, Park Chung-hee.

A related article in the magazine, titled "History's Child," covers the candidate's life journey, her political vision and how she is viewed by the people around her, according to the party.

According to the party, Time argued in the article that in order for Park to win, many South Korean voters will either have to forget the past or be prepared to forgive.

Park has often come under fire for defending her father, who took power in a military coup in 1961 and ruled the country with an iron fist until his assassination in 1979. (Yonhap)