Ulsan given the blues as Chelsea date canceled

Ulsan given the blues as Chelsea date canceled 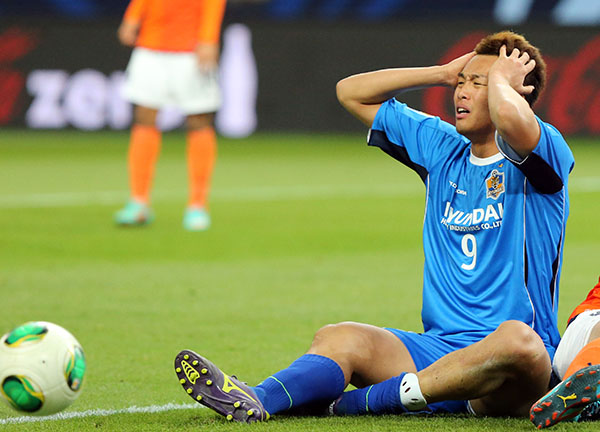 Ulsan Hyundai striker Kim Shin-wook looks distraught after shooting wide in the second half of a match against Monterrey. The Mexican club won 3-1 to advance to the semifinals of the FIFA Club World Cup in Toyota, Aichi in Japan.[YONHAP]


Ulsan Hyundai failed to set up a dream match with Chelsea as they succumbed to Monterrey 3-1 in the FIFA Club World Cup in Japan yesterday.

In the game at Toyota Stadium, Aichi Prefecture, midfielder Jesus Corona put the Mexican club on the scoreboard with a ninth-minute left-footer as it took advantage of defensive lapses by the Asian regional winners.

Argentine forward Cesar Delgado extended the lead by adding two goals in seven minutes in the second half.

Lee Keun-ho managed to pull one back for the Koreans near stoppage time with a midrange shot that goalkeeper Jonathan Orozco narrowly missed.

Ulsan will have a fifth-place decider on Wednesday against the loser of a match between Al Ahly of Egypt and Sanfrecce Hiroshima.

Monterrey dominated Ulsan throughout the match with its formidable forward line including Delgado, a former Argentina national team member, Walter Ayovi of Ecuador and Neri Cardozo, also of Argentina. Humberto Suazo, a Chilean forward, sat out the game.

Mexican players filled the vacuum left by Suazo, with striker Aldo De Nigris setting up Corona’s goal, allowing him to fire a close-range shot into the net.

De Nigris also assisted with the second goal as his cross was converted by Delgado past Ulsan keeper Kim Young-kwang in the 77th minute.

Monterrey could have added to Ulsan’s blushes but a goal by defender Sergio Perez 10 minutes into the second half was subsequently ruled offside.

Ulsan failed to keep their composure, not being able to draw on the formidable attacks that saw them win the Asian Football Confederation Champions League.

Ulsan mounted a strong offense en route to winning the title, scoring 27 goals in 12 games, or 2.76 goals per game, including a 3-0 rout of Al Ahli of Saudi Arabia at the final in Ulsan on Nov. 10.

In yesterday’s match, 27-year-old midfielder Lee reduced the deficit in the 88th minute when his midrange shot slipped through the keeper’s fingers.

With the loss, Ulsan failed to become a third straight Korean club to advance to the semifinals of the Club World Cup.

The Pohang Steelers finished in third place in 2009, the best-ever performance in the prestigious event by a Korean club, after reaching the semifinal with a 2-1 win over Mazembe of Congo.

Seongnam Chunma also reached the semifinals in 2010 by routing Al-Wahda of the United Arab Emirates 4-1 before getting crushed by Inter Milan 3-0 in the semifinal. Seongnam suffered a 4-2 loss to Internacional of Brazil in the third-place decider and settled for fourth.

Ulsan is the fourth K-League team to advance to the elite international tournament. Jeonbuk Motors finished fifth in 2006 after losing their first game.