Commedia dell’arte - with a Korean twist

Commedia dell’arte - with a Korean twist 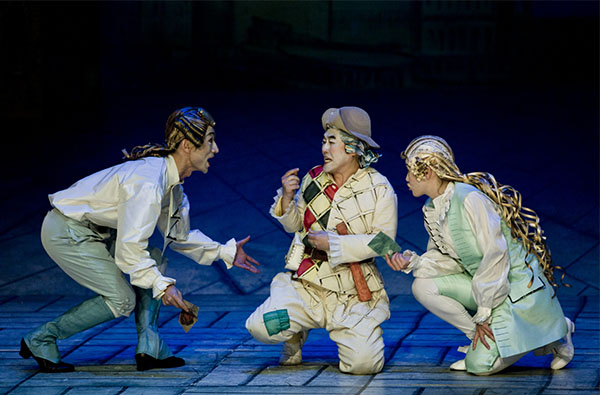 Truffaldino, center, played by Baek Won-gil, is embarrassed when his two masters, Beatrice, right, and Florindo meet. Provided by the theater


Hundreds of years ago, when Korea was a strict hierarchical society, the word “servant” was not used as often as it was in the West; those in the low rungs of the horizontal Confucian class structure were taken for granted to the extent that they were not even referred to by their vocation.

Such a lack of identity and individuality has provided fodder for the imaginative minds of writers, with the servant-master relationship featured prominently in Korean works like Kim Ki-young’s “Housemaid” (1960) and the 2010 remake by Im Sang-soo.

A local theater has brought an Italian play to Seoul that portrays a servant in a different light - the genuine Truffaldino’s only flaw is his stupidity, which is not enough to harm his masters.

And yes, it’s “masters,” plural - a key element of the plot that makes the play a feel-good comedy.

The “Servant of Two Masters,” which dates back to the Italian Renaissance’s Commedia dell’arte genre, is being staged at Myeongdong Theater in central Seoul.

It is a the second time the play is being held in the venue, with the National Theater of Korea presenting it for the first time in 1967.

The original, staged 45 years ago, was written by Italian playwright Carlo Goldoni in 1743. The current performance is an adaptation by Lee Hall, an English writer known for the 2000 film “Billy Elliot.”

The character at the center is loosely disciplined servant Truffaldino, who is overcome by poverty and finds two masters to serve at the same time. The Venetian servant, played by Baek Won-gil, wants to conceal his divided loyalty from the two masters, and tries to keep them from coming across each other.

What he does not know, however, is that the two masters, Beatrice and Florindo, played by Kang Ji-won and Kim Byung-chul, respectively, happen to be lovers who have been unwillingly separated by a tragic twist of fate but are hoping for a reunion.

Goldoni’s work was adapted by many other writers, including Richard Bean, an English playwright, who set his version “One Man, Two Guvnors” in Brighton, England, in 1963.

The work staged at the Myeongdong Theater is faithful to the original setting, but director Oh Kyung-taek attempted to put on a play that also includes a satire of modern society, according to the theater.

The humor is directed at a Korean audience. Some of the comic conversations between the characters would remind locals of lines used on “Gag Concert,” a weekly KBS group comedy show.

For instance, Silvio, a crafty aristocrat who creates some tension between Truffaldino’s two masters, draws laughter when he asks his mother in a solemn voice whether he can have a “hot choco” instead of an “Americano.”

The comic lines, however, are almost scripted, despite the fact that the Commedia dell’arte genre is characterized by improvisation. To create a similar effect, the play is performed speedily, most conspicuously with rapid-fire conversations among the characters.

Another character of the Italian genre is allowing some of the characters to use different dialects in order to play on words, which the Myeongdong Theater adopted.

Beatrice, who speaks the Gyeongsang dialect in the play, wants to entrust Truffaldino with her belongings and says, “A-na,” which in Gyeongsang means “Here you are.”

Truffaldino, who speaks the dialect of Chungcheong, a region closer to Seoul, misunderstands it as “An-a,” the standard Korean meaning “Hug me,” and tries to hug her only to be scolded for it.

Some of the Korean modifications, however, are not thoughtful enough and may lower the quality of the original version, like a not-so-amusing rap song by minor characters in the middle of the play.

But, this is not one for the critics. It is one for families, friends and lovers. And that is exactly why the Myeongdong Theater is staging it this Christmas season only.

* The Myeongdong Theater is holding the “Servant of Two Masters” at 7:30 p.m. on weekdays and 3 p.m. on the weekend and holidays with the final performance set for Dec. 30. There is no performance on Wednesdays. The ticket prices range from 20,000 won ($18.50) to 50,000 won. No English subtitles are provided.