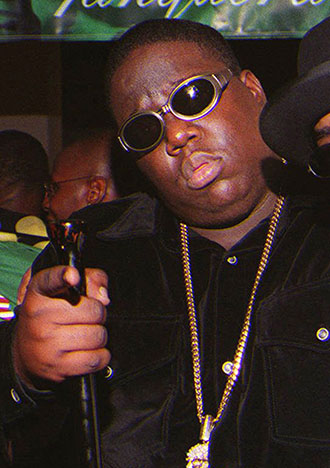 LOS ANGELES - The autopsy report into the death of rapper Notorious B.I.G. has been released, 15 years after he was killed in a drive-by shooting in Los Angeles.

The 24-year-old - killed months after the death of rival rapper Tupac Shakur - was hit by four bullets.

The LA County Coroner’s report said the fatal shot entered his body at hip height before slicing up through his colon, liver, heart and left lung.

Other nonfatal shots hit his left forearm, back and left thigh.

No drugs or alcohol were found in his system, according to toxicology tests.

“Decedent may be rap singer,” said a scrawled note near the end of the 23-page, mostly type-written report.

Notorious B.I.G., real name Christopher Wallace, was a passenger in a car when he was shot on March 9, 1997, in a slaying attributed to the intense rivalry between rappers on the western and eastern U.S. coasts.

The reason for the autopsy report’s delayed release is unclear. But there have been prolonged investigations over the years involving both the LA police department and the FBI, and allegations by various people about who was behind the killing.

A spokesman for the LA County Coroner’s Office, Craig Harvey, said he did not know why the report was released only now.

“We are only the keeper of the record. The decision to place on Security Hold or remove Security Hold rests with the law enforcement agency,” he said.

The murder on LA’s Miracle Mile area, which remains unsolved, came six months after his rapper rival Shakur was gunned down in Las Vegas. Shakur’s killers also remain at large.

Various theories have linked the two murders. Some believe they were killed as part of a rivalry between their two music labels at the time, LA-based Death Row and New York-based Bad Boy Entertainment, according to The LA Times.

Wallace’s family has fought a long-running legal battle against authorities in Los Angeles, alleging that a police officer was involved in the murder, which bore all the hallmarks of a contract killing.