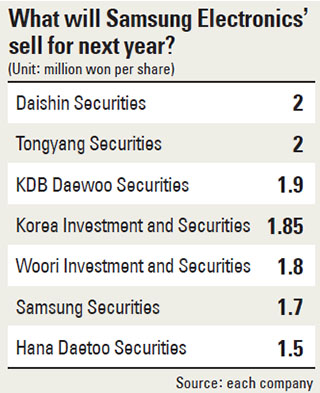 Local brokerage firms have come up with a series of optimistic forecasts on Samsung Electronic share prices, with some firms predicting it could reach as high as 2 million won ($1,850) next year thanks to strong sales of smartphones.

According to data compiled by FnGuide, a stock information provider, the average target price for Samsung Electronics’ shares in 2013 suggested by 28 local brokerage firms was 1,770,000 won.

Daishin Securities and Tongyang Securities gave the brightest outlook for the world’s largest smartphone maker, predicting its share price could go as high as 2 million won next year.

Samsung’s shares closed at a record high of 1,480,000 won on Friday, up 26,000 won from Thursday on the back of solid earnings and an expanded stake in the global smartphone market.

According to Strategy Analytics, Samsung controlled 33.9 percent of market share in the global smartphone market in the third quarter, far ahead of Apple’s 15 percent.

At this pace, market analysts think 50 percent of Samsung Electronics’ sales could be generated from smartphone sales this year.

“Sales of smartphones have been better than expected, and Samsung will see growth in its semiconductor and display businesses as well next year,” said Park Hyun, an analyst at Tongyang Securities.

In the July-September period, Samsung registered a record 8.1 trillion won operating profit on the back of solid sales of its flagship Galaxy S3 smartphone. Operating profit from the company’s IT & Mobile Communications Division accounted for roughly 70 percent of the total.

The data by the FnGuide said the world’s largest supplier of memory chips and flat-screen TVs is forecast to rake in a record 28.82 trillion won in operating profit in 2012, with its sales expected to top 200 trillion won.

But there are views that the ongoing legal battle with Apple and the company’s heavy reliance on the smartphone business may be a problem for Samsung down the road.

“It is true that Samsung is a winner in the smart mobile device era,” said Hwang Min-seong, an analyst at Samsung Securities. “But it is faced with many uncertainties including a series of global lawsuits with Apple.”

Samsung and Apple, which are both rivals and partners in the mobile business, have been involved in a dogged war over design and technology patents on four continents since April 2011.

Hwang said Samsung must come up with new sources of revenue other than smartphones.

“There are views that the smartphone industry is already past its peak, and profit contributions by semiconductors, organic light-emitting diodes and tablets aren’t big enough,” Hwang said.