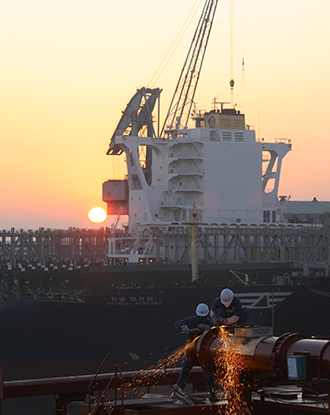 With declining orders and halved profits this year, shipbuilders and steelmakers, the two new pillars of the country’s exports, are trimming down both their work forces and production as a last resort to overcome their ongoing slumps.

Hyundai Heavy Industries, the world’s No. 1 shipbuilder, decided to cut the number of high-paid executives by 10 percent in its latest personnel reshuffle.

Ahead of the reshuffle, the company asked its employees to retire for the first time in its 40-year history. Around 100 manager-level employees over 50 applied for voluntary retirement, the company said.

HHI has traditionally been a solid performer and didn’t carry out any restructuring during the 1998 Asian financial crisis. In July, its labor and management agreed to raise the retirement age from 58 to 60. Since most employees have been at the company for 20 years, the restructuring announcement came as a shock to the market.

“The reason for carrying out the voluntary retirement is not that the company’s order backlogs are running out, but that it wants to prevent its work force from getting old, and hire fresh and young workers with the aim of creating jobs.” 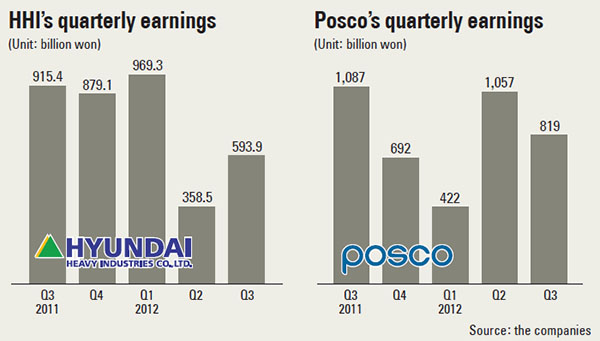 However, industry insiders interpret the shipbuilder’s unprecedented restructuring move as a sign of increasing awareness of difficulties within the company.

“This is just the beginning of further hardship that will impact secondary and tertiary suppliers for the shipbuilder,” said a sales employee at one of HHI’s primary part suppliers. “The fact that the world’s largest shipbuilder is conducting its first-ever restructuring of this kind implies that the rest of the industry is having an even harder time.”

HHI looks like it is going through its roughest patch in the last five years due to the impact of the euro zone debt crisis.

“The shipbuilder won’t be able to reach its target order value of $27.3 billion this year,” said Shim Won-seob, an analyst at IBK Investment & Securities.

The company has accumulated orders worth a total of $17.3 billion this year as of late October, down 25 percent from the same period in 2011. It posted operating profit of 593.9 billion won ($548.8 million) in the third quarter, down 35 percent from a year earlier.

“Just as the Japanese lost out to Korean shipbuilders before due to their aging work forces and low productivity, HHI is now experiencing a similar problem,” said an official in the shipbuilding industry. “This time, HHI attempted to cut its administrative work force, but it might have to reduce workers at its dockyards next time.”

Although two other major shipbuilders - Samsung Heavy Industries and Daewoo Shipbuilding & Marine Engineering - say they have no plan to take similar actions, industry insiders predict there could be some organizational restructuring to enhance their offshore plant businesses.

“Since the shipbuilding business is expected to have another depressed year, it is highly likely that the local shipbuilders adjust the current personnel assignment, which has been mostly focused on shipbuilding, to the new business that is forecast to be more profitable next year,” said an official at the Korea Shipbuilders’ Association.

HHI’s restructuring effort is likely to go beyond the shipbuilding industry and affect the steel industry too.

Union Steel, a subsidiary of Dongkuk Steel, the country’s third-largest steel producer, also carried out a small round of restructuring recently. A total of 20 out of 1,000 employees volunteered to retire just like the HHI workers.

The company posted a net loss of 10.7 billion won as of the third quarter, falling into the red from a 7.5 billion won profit last year.

The steel industry is also projected to experience a tough year in 2013 unless current oversupply problems are addressed soon.

According to the Korea Iron & Steel Association, the aggregate production of local steelmakers surged 3.4 percent to 70.47 million tons, while steel demand declined 0.1 percent to 59.77 million tons this year.

Oversupply stemmed from reckless expansion of production facilities in 2008, when the steelmakers were asked to expand by shipbuilders enjoying robust sales.

Posco, the biggest steel manufacturer, isn’t yet planning to carry out restructuring. However, it has begun cutting steel production in response to falling profits.