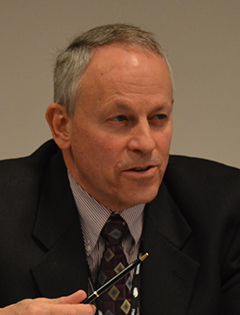 MILWAUKEE, Wisconsin - Korea’s best solution on the conflict over Dokdo with Japan would be to pursue a low-key approach and to remain calm and rational, said Terence Roehrig, professor of national security affairs at the United States Naval War College.

“I think Korea’s best position [on the Dokdo issue] is to be low-key about it,” said Roehrig, in an interview with the Korea JoongAng Daily conducted on the sidelines of a seminar put together by the Korean-American University Professors Association (Kaupa) on Saturday at the University of Wisconsin-Milwaukee.

Some 50 Korean-American professors and experts from diverse backgrounds - including political science, history, communication and geography - gathered at the school for a one-day conference to present their views on the ongoing diplomatic row over Dokdo, Korea’s easternmost islets also claimed by Japan as its own territory.

The seminar, titled, “Perspectives on the Sovereignty Issue over Dokdo,” was voluntarily hosted by Kaupa, a group of some 3,500 Korean and Korean-American professors, to inform American society about Korea’s sovereignty rights over Dokdo.

“A calm, rational assertion of Korea’s position is the best position in this [Dokdo] case because I think there is a danger if Korea reacts too strongly, too boisterous, too over the top, that it portrays Korea in a sort of irrational light.

Roehrig, also a research fellow at Harvard University’s Belfer Center in the Kennedy School of Government, added that President Lee Myung-bak’s abrupt visit to Dokdo in August was “problematic” and that it “raised the tension level that may not necessarily have been helpful.”

Ever since President Lee made a surprise trip to Dokdo - islets located 87.4 kilometers (54 miles) southeast of Ulleung Island that are effectively controlled by Korea - conflict between Korea and Japan has risen over the issue of sovereignty.

Japan has since requested Korea to take the issue of Dokdo to the International Court of Justice, which Seoul refused because Seoul insists no territorial dispute exists.

Professor Roehrig, who has published articles on Korean politics and security, also noted that the best policy would be if Japan and Korea sat down and arrived at a solution, but he doesn’t think the two countries are in the position to do that right now.

Along with Roehrig, Paul Huth, a renowned political scientist and professor of government and politics at University of Maryland, also said that from an objective point of view, “Korea established its presence there [Dokdo islets], and Japan is trying to change the territorial status quo of the island.”

Huth made a point, though, that it is highly unlikely for Tokyo to overturn the status quo by the “use of force,” while at the same time “unilaterally withdraw its claims on the islands.

“This leads to a general point: If there is going to be a process of peaceful conflict resolution over the islands, the key here is that the challenger Japan is going to make fundamental concessions on the issue.”

Some professors present at the seminar criticized Japan’s incorporation of Dokdo in 1905, when the then Japanese foreign minister sent an official letter to Japan’s prime minister and requested approval of ownership of Dokdo, referring to it as “terra nullius,” a Latin expression translated as “land belonging to no one.”

Korea refutes Japan’s claim because at the time in 1905, Dokdo was not a no man’s land but in fact Joseon territory.

“Japan’s claim on this island is like an emperor without clothes,” said Choe Yong-ho, professor emeritus of history at University of Hawaii, Manoa. He outlined Japan’s takeover of Dokdo in 1905 as part of a historical perspective of the Dokdo issue as a whole. “A confluence of three forces ? economic advantage, the rise of Japanese desire to dominate Korea and the rise of Japanese military power ? made Japan incorporate Dokdo,” Choe said, noting that before 1905, Japan showed no intention over Dokdo.

Kim Hong-nack, professor of political science at West Virginia University, also made a case saying that Japan made two mistakes.

“Dokdo was no terra nullius,” Kim said. “Secondly, incorporating Dokdo did not follow the well-established international custom of notifying the neighbor country.”