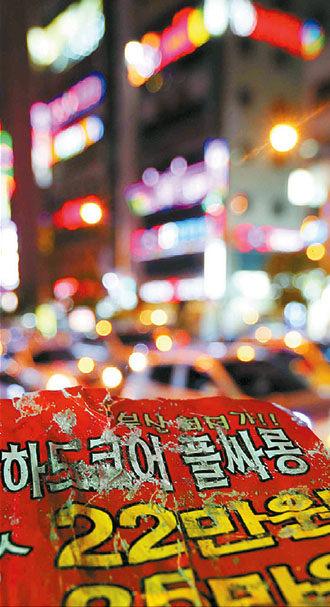 Leaflets advertising “full salon” service were handed out to passersby at night on Dec. 2 in a red-light district in Busan. “Full salon” service implies a customer can drink with a hostess and then have sex for money in the same building. By Song Bong-geun

After the sex trade law went into effect on Sept. 23, 2004, the number of old-style red-light districts in Korea decreased, but prostitution has taken on new forms and began popping up in areas where people live and send their children to school.

A team of JoongAng Ilbo reporters investigated how these prostitution places are operating in the country’s major cities, including Seoul, Busan, Gwangju and Ulsan, in November.

On Nov. 2, at a red-light district near Yeongdeungpo Station, western Seoul, one brothel was under renovation. “That one is pretty popular among customers. That’s how they have the money to remodel,” a nearby merchant told the JoongAng Ilbo.

Many regions including Yeongdeungpo, Hawolgok-dong, northern Seoul, Cheonho-dong, eastern Seoul, and Cheongyangni and Yongsan District, central Seoul have long carried reputations as red-light areas, but Yongsan is the only place where those brothels have completely disappeared. In Yongsan District, the area where the ladies used to stand in front of the windows is now a construction site.

Before the law, there were more women who stood before plate glass windows backlit with red or pink lamps, done up in makeup and wearing high heels, waiting for customers. Entire city blocks would glow with these establishments. Some still remain, but they’re becoming outdated.

The police’s strong crackdown on prostitution contributed to lowering the number of brothels but not the amount of prostitution, and some brothels are coming back.

“We don’t have enough manpower,” a police officer of the Yeongdeungpo Police Precinct said. “The number has decreased, but there are many survivors.”

The situation was similar in Busan, Gwangju and the Gyeonggi region. Dozens of brothels still turn on their red lights every night.

“The [sex] industry isn’t good like it was in the past,” a prostitute in Paju, Gyeonggi, told the JoongAng Ilbo. “But each brothel makes at least 3 million won [$2,770] to 4 million won a month.”

According to a sex trade study conducted by Seoul National University in 2010, the number of prostitutes in brothels is 3,917, up by 273 from 3,644 in 2007. “Brothels are not the first option for Koreans any more as they prefer to go to massage parlors, room salons or officetels,” a worker at a brothel said. “But many migrant workers have become loyal customers.”

On the same day on the street of Sangmu District, Gwangju, black luxury sedans delivered a steady stream of women to room salons. For every car, at least two or three women in heavy makeup walked into a room salon.

Within a one-kilometer (0.6-mile) radius in the district, about 200 places, including massage shops and room salons, could be found, and about 90 percent of them told reporters that they could arrange sex for money. The price for one person for sex ranged from 150,000 won to 600,000 won.

People in the industry said Sangmu District wasn’t always a hotbed for sex, as it only originally had about 50 shops, but it rapidly became a center for prostitution when the revised sex law went into effect in 2004.

“Brothel owners who tried to avoid the police’s crackdown went to Sangmu and opened different-style prostitution places, such as massage parlors,” a room salon worker told the JoongAng Ilbo.

According to the 2010 sex trade study, the number of red-light districts decreased to 25 from 31 in 2008. It added that the country’s sex industry generates 8.7 trillion won and about 7 percent, or 576.5 billion, of that total comes from brothels.

The study however said the number of room salons and massage parlors that offer prostitution has gradually increased in the last few years-from 195 in 2009 to 228 last year in Sangmu District.

The real problem of these emerging areas is their locations. Many are located close to residential or school areas.

Other than room salons and massage parlors, officetels, where pimps arrange sex via the Internet or mobile messengers, are also a popular option. Once a pimp receives a call from a customer, he or she provides the room number of an apartment where a prostitute waits. The JoongAng Ilbo found 71 officetels that offer prostitution near Yeoksam, Gangnam, Seolleung, Hongdae and Sinnonhyeon stations.

When the JoongAng Ilbo called an officetel service in Mapo District, western Seoul, the pimp immediately gave the exact location information and price for prostitution. There was a private child care center on the second floor of the building.

The advancement of Internet and smartphones has also had a noticeable impact on the sex trade. In order to avoid the police, many pimps create Internet cafes to arrange sexual services. They include photos of prostitutes, their body sizes, as well as types of available services.

When the JoongAng Ilbo made inquiries through popular mobile messengers such as KakaoTalk and Scout, a woman who identified herself as a manager of an officetel responded in 20 minutes that she could arrange sex immediately.

The revised sex trade law states that people who force someone to have sex with another in return for money and human trafficking for sex are subject to at least three years in prison. It also states that all profit from prostitution will be confiscated by the government. The customer could also be charged under the law.

“The government misjudged that it could root out prostitution only by revising the sex trade law,” Prof. Lee Wung-hyeok of the Public Administration Department of Korean National Police University said. “Prostitution places are propagating into residential and school areas like cancer cells.”