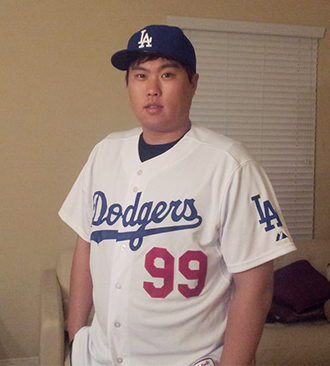 The deal for the seven-year veteran of the Hanhwa Eagles is worth $36 million including a $5 million signing bonus, making him the third-highest paid foreign pitcher in the Majors acquired through the posting system, behind Yu Darvish and Daisuke Matsuzaka.

The signing, which was finalized with less than one minute before the deadline, has excited Korean baseball fans who have only had slugger Choo Shin-soo of the Cleveland Indians to root for. Ryu will become the 13th Korean to play in the MLB.

Three other Korean ball players have worn Dodgers uniforms, playing in the city with the largest population of Koreans in the United States. Pitchers Park Chan-ho (1994-2001) and Seo Jae-weong (2006) took the mound at Dodger Stadium, while first baseman Choi Hee-seop (2004-5) had a brief stint in Los Angeles as well.

“We are excited to welcome [Ryu] to Los Angeles and the United States, continuing the tradition of Korean pitchers with the Dodger organization,” said Dodgers general manager Ned Colletti on the team’s Web site.

“The Dodgers continue to show the commitment to signing players from Asia and other international areas where baseball is played at the highest levels.

“We are looking forward to watching Ryu pitch for the franchise.”

Ryu, 25, who was set to become a free agent in 2014, sought an early transfer to the Majors and began exclusive negotiations with the Dodgers on Nov. 30, after the Eagles granted posting rights.

The Dodgers showed intense interest in Ryu early on, posting $25.7 million to earn the rights to negotiate with Hanhwa, but the talks grew protracted with his agency and the Dodgers refusing to iron out differences. Scott Boras, who was Matsuzaka’s agent, represented Ryu.

The deal was made at the last minute - literally. The negotiation was scheduled to close at 7 a.m. yesterday Korea Standard Time.

The two sides reached an agreement with only 30 seconds left, according to those with knowledge of the deal.

Boras, known for his brinkmanship negotiation tactics, is assessed to have pulled off a satisfying deal for Ryu.

The Dodgers said the package includes a $1 million yearly bonus based on innings pitched, making the maximum amount he can earn $42 million over six years.

The contract was also reported to include an opt-out clause, in which Ryu can become a free agent after five seasons with the Dodgers as long as he pitches at least 750 innings over five years, or 150 innings per year. Ryu pitched 181 innings each year on average in the KBO.

Ryu will walk away from the Korean league with 98 wins against 52 losses. He won 18 times in 2006, becoming the first and only player to win both the most valuable player award and the rookie of the year honor in the same year. His double-digit winning streak only stopped this year, when he finished with nine wins during the team’s dismal season.

Ryu is one of the few left-handers in Korea who can pitch nearly 150 kilometers per hour (93 miles per hour). He also has a variety of breaking balls, including a curveball and slider.

The ace also helped Team Korea shine during major international competitions including the 2008 Beijing Olympics, during which he went 2-0 with a 1.04 ERA. He pitched during the 2009 World Baseball Classic.

The Dodgers, who are looking to make the playoffs for the first time in four years, will start spring training on Feb. 13. The first preseason game is against the White Sox on Feb. 24.

Ryu is expected to compete for a spot in the starting rotation. The Dodgers have emerged as a pitching powerhouse with recent acquisitions.

Zack Greinke (15-5), the biggest free agent this offseason, signed a deal with the Dodgers on Sunday and is expected to vie for the starting position with Clayton Kershaw (14-9). Los Angeles also has Josh Beckett (7-14) and Chad Billingsley (10-9).