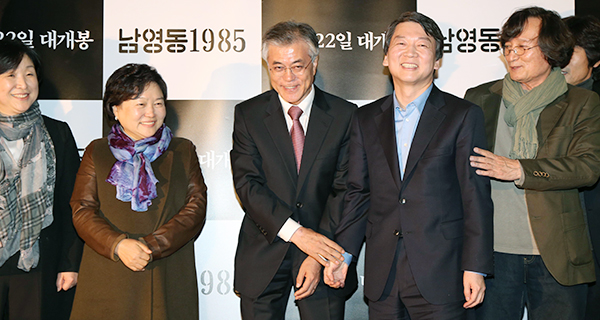 With Ahn Cheol-soo at his side, Moon Jae-in of the main opposition Democratic United Party raised the stakes by proposing to create a coalition government with civilian liberal forces. He agreed to work closely - even after next week’s election - with Ahn, a popular independent candidate who dropped out of the presidential race a day before registration after talks between the two to select a single candidate broke down. Moon held up his cards - Ahn and his supporters, Sim Sang-jeong of the Progressive Justice Party and a group of civilian associations - as he pledged to launch the first coalition government since a trial between President Kim Dae-jung and Kim Jong-pil if elected.

The first cohabitation experiment between a long-time dissident leader and a conservative figure from the military junta was a complete disaster. The coalition showed fissures from the legislative election in 2000. Kim Jong-pil’s United Liberal Democrats won just 17 seats, three short of qualifying as a floor-leading negotiating group. President Kim Dae-jung attempted to change the regulations in order to allow the party into the decision-making group, but was blocked by the then-opposition Grand National Party. After wrangling for eight months, the two coalition partners came up with the ingenious idea to move lawmakers from Kim Dae-jung’s Democratic Party to Kim Jong-pil’s party.

Voters were astounded to discover that their elected DP representatives suddenly became ULD members. Current National Assembly Speaker Kang Chang-hee, who was then secretary of the ULD, protested the idea and refused to sign up for the floor-leading group. He was kicked out of the party and President Kim had another DP legislator step in.

The two Kims strived to make the shaky marriage work, but the odd couple finally fell apart. Kim Jong-pil had not been happy with the North Korean experts in Kim Dae-jung’s administration, particularly with Lim Dong-won, then chief of the National Intelligence Service. Kim, from his own experience, believed that the chief of the national spy agency should keep a low profile and stand firmly against North Korea. Lim, however, conspicuously tried too hard to please North Korean leader Kim Jong-il during the first-ever inter-Korean summit in June 2000.

In the following year, South Korea sent a delegation to a joint celebration of the Aug. 15 Liberation Day in Pyongyang. Kang Jeong-koo, a liberal sociology professor, and other visiting members acted and spoke as if they appreciated the Pyongyang regime. Kang penned pro-North Korean comments in the guest book at the birthplace of North Korean founder Kim Il Sung. Some South Koreans sang along to propaganda songs eulogizing Kim and even showed tears upon seeing his mausoleum.

Kim Jong-pil was enraged and demanded the resignation of Lim, who was then unification minister. When President Kim refused, the ULD teamed up with the Grand National Party to push forward a motion to dismiss Lim. The incident pulled the plug on the three-year cohabitation government. Kim Jong-pil and his party returned to their right side of the Assembly. The four leased lawmakers went back to their original seats on the left.

Their experiment proved how disastrous a political marriage of convenience between two differing factions can be. Kim Jong-pil told his party members: “I signed my name in the guest book of the National Cemetery as a survivor. Of my 1,600 peers from the eighth class of the military academy, 430 died during the Korean War. What would have my friends said when they heard about South Koreans weeping over the wax figure of Kim Il Sung?”

Ahn and Moon are poles apart on the ideological front. Two days before deciding to declare support for Moon, Ahn confessed to his adviser that he was a reasonable conservative and moderate liberal and that he rediscovered how distant they were during the TV debate with Moon. During a one-on-one televised debate, Moon attacked Ahn, saying that his thoughts on North Korea were no different from those of the incumbent Lee Myung-bak administration.

Moon’s alliance with the splinter left-leaning labor party of Sim Sang-jeong won’t likely proceed smoothly. The progressive party in its platform demands participation of workers and civilians in corporate management and economic policies. When and if the new coalition government is launched, extreme left-wing activists may join. Ahn would have to work with them as well.

The coalition may look good on paper, but whether it would work remains in question. A government can succeed under a common philosophy and principle. Leadership cannot be shared, especially among people who think differently.