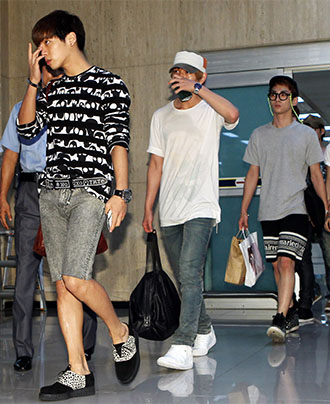 SHINee had Singapore in frenzy on Dec. 8 when it performed at the Singapore Indoor Stadium.
More than 10,000 fans turned up for the “SHINee Concert - SHINee World II.”

Hits like “Oxygen,” “Ring Ding Dong” and “Sherlock” were sung as well as solos by the members. In all, more than 29 performances took place.

Fans treated the group to synchronized songs of cheer in Korean as well as singing along to the songs in the group’s native tongue.
As Minho and Onew’s birthdays fell on Dec. 9 and 14, respectively, fans also surprised the group with an impromptu birthday celebration.

“All major media channels assembled to report on the group’s arrival at the airport and the airport was just a chaos,” said a spokesperson for SM Entertainment.

The group will release a new song titled “1000 Years, Always by Your Side” on Dec. 12.
By Carla Sunwoo [carlasunwoo@joongang.co.kr]