RG3 goes down, but Redskins stand tall in OT

RG3 goes down, but Redskins stand tall in OT 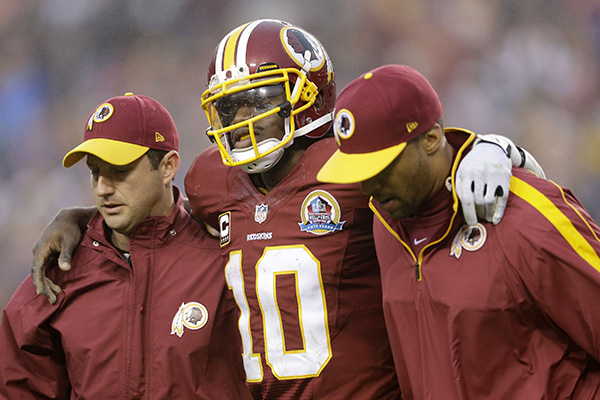 Washington Redskins quarterback Robert Griffin III is helped off the field during a game against the Baltimore Ravens. Despite his injury, the Redskins beat the Ravens 31-28 in OT. [AP/YONHAP]

Teammates stood at their lockers, mixing the emotions of an improbable 31-28 overtime win over the Baltimore Ravens with the fear that their franchise player could be seriously hurt.

“We’re happy that we won, obviously,” left tackle Trent Williams said. “But that is concerning, knowing he went down. Everyone wants to know how he’s doing.”

Griffin went down during Washington’s final drive of regulation Sunday, with the Redskins trailing by eight. Fellow rookie Kirk Cousins, who had played in only one other game this season, stepped in and hit Pierre Garcon for an 11-yard touchdown pass with 29 seconds remaining, then ran the quarterback draw for the two-point conversion to tie the game.

Yet another rookie, Richard Crawford, returned a punt 64 yards in overtime to set up Kai Forbath’s 34-yard game-winning field goal.

The Redskins (7-6) have a four-game winning streak - remaining one game behind the New York Giants in the race for the NFC East title - but the day’s most important result was still to come. About three hours after the game ended, the Redskins said an MRI exam showed no major ligament damage.

The worst-case scenario would have been a season-ending ACL tear, like the one Griffin had on the same knee while playing for Baylor in 2009. But team spokesman Tony Wyllie said the MRI showed “everything is clear” and ruled out that sort of significant injury.

At about the same time as Wyllie’s announcement, Griffin tweeted: “Your positive vibes and prayers worked people!!!! To God be the Glory!”

Griffin had been confident that his injury wasn’t serious.

“I’m not a doctor, but I know what an ACL feels like,” Griffin said immediately after the game. “And it doesn’t feel like an ACL. .?.?. If I felt that, I’d be pretty nervous. But we won the game, everybody’s praying for me, I feel pretty good right now about the whole situation.”

Griffin left after the injury for one play, then returned for four more, completing two passes to get the Redskins deep into Ravens territory. But he was also hopping on one leg.