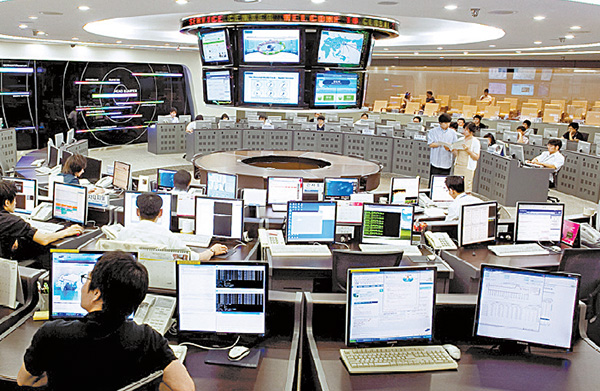 
Local conglomerates’ subsidiaries that specialize in system integration (SI) are expanding overseas at a faster rate as they will be banned from bidding for orders placed by government or public corporations from next month.

SI companies install and run an aggregation of subsystems on one platform to help various divisions of a company function together.

Many conglomerates such as Samsung, SK Group and LG Group have installed their own computing programs and systems through their respective SI subsidiaries - Samsung SDS, SK C&C and LG CNS - which are considered the top three in the domestic market.

The subsidiaries, which benefit from the experiences learned and technologies developed in-house, are now broadening their horizons as they seek further growth momentum.

As its mother company has expertise in mobile and communications services, SK C&C has also shown strength in mobile system integration.

It signed a deal in September to establish a mobile wallet system for the world’s second-largest carrier Vodafone, which has 430 million subscribers in more than 40 countries.

Such a move came after the company set up a system called “trusted service manager” for Google Wallet in May last year, which enabled consumers to have embedded credit card information on their phones so that they can buy goods without carrying the actual cards.

It also set up a mobile wallet service for Dunkin’ Donuts this August so that buyers at more than 6,000 stores in the United States can pay for their food through a mobile payment application.

“As more SI companies expand to overseas markets, a virtuous circle is created as they continue to accumulate more technology by working on larger projects than those in Korea. They also share more insider information with the countries and companies they have worked with,” said Lee Chang-young of Tongyang Securities, adding that they also pave the way for smaller companies to follow in their footsteps.

“As installing these system requires more of an investment in human resources than financial resources, there is less risk of seeing losses from expanding overseas than in other industries,” he added.

SK C&C, the only listed company of the aforementioned three, earned 7 percent of its total sales from overseas last year. As of the third quarter, it saw global sales this year hit 75.5 billion won ($69.9 million), up 24.3 percent from the same period last year.

“We have been involved in overseas projects since 2005, but we have been expanding these at a faster rate recently,” said Min Kyung-dong, who deals with public relations for SK C&C. It has seen overseas sales explode from 600 million won in 2005 to 94.2 billion won last year, she said, adding that it aims to derive 25 percent of its total sales from outside Korea by 2015.

“Although we have shown our expertise in mobile system integration, we will continue to diversify our business projects because we have tested system installation for many different industries within the group,” said Min.

It was chosen to build an emergency management information system for the Mozambique government’s internal affairs department last month for $25 million. For the next 15 months, the company will integrate systems from the country’s police to fire stations through wired and wireless emergency communications networks.

It was also chosen to establish Kenya’s public key infrastructure for $5 million, which enables people there to get online identification certificates by the government for their financial transactions or official documents. It renovated a government employment information system in Tunisia last year and is currently testing an electronic procurement system there.

“As we have successfully installed electronic systems for governments in Tunisia and other African countries we will continue to expand in the region,” said No Hak-myeong, a senior executive at Samsung SDS.

The company has also worked with private companies in the Middle East, as it was chosen to build the IT system for the King Abdulaziz Center for World Culture, constructed by Saudi Arabia-based Aramco, the world’s largest oil producer. It also added an electronic payment system to the gates of subway stations in Beijing and Guangzhou.

LG CNS is focusing more on eco-friendly solutions as it developed its own urban planning system in July. The company even signed to install such a system in Dalian, northern China, last month. It has also built solutions for a photovoltaic power generation system in Bulgaria.

Although experts say it’s important to expand market shares in developing countries, they advise SI companies to diversify their business portfolios to compete in more developed markets for bigger profits.

“They need to focus more on big data or cloud systems to compete with other businesses working in North America or Europe,” said Lee.