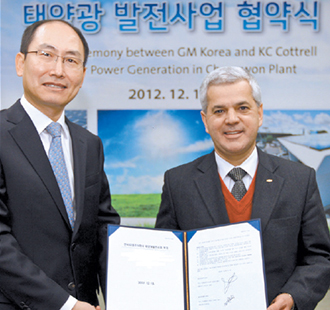 GM Korea President and CEO Sergio Rocha, right, shakes hands with KC Cottrell CEO Lee Tae-young yesterday after signing an agreement to build a three-megawatt solar power generation facility at the automaker’s plant in Changwon, South Gyeongsang. “We are adopting fuel-saving technologies in our vehicles while promoting recycling and energy efficiency in our facilities,” Rocha said in a release. “Our Changwon plant, which is the home of the Chevrolet Spark electric vehicle, will set a good example for low-carbon, green growth using renewable energy.” The facility will produce 3,700 megawatt hours of electricity annually, which is equivalent to the energy used by 1,200 homes. It will cut carbon emissions at the facility by 2,400 tons per year. GM Korea said that the solar facility will go into service in the third quarter of 2013. Provided by the company