‘Younique’ tag not boosting sales yet

‘Younique’ tag not boosting sales yet


Hyundai Motor’s i30, i40 and Veloster are struggling to post strong sales figures despite the company’s aggressive marketing under its “PYL” tag.

It first launched this last year under the name “Premium Youth Lab,” before changing it to “Premium Younique Lifestyle” this September to hone in on young drivers by appealing to their individuality.

The automaker has included the three small cars under the PYL brand using various events and advertisements. It hosted parties, concerts and even released a music album in association with SM Entertainment, the agency that manages artists like Girls’ Generation and BoA.

“The idea was to interact more with customers that have unique characteristics,” Hyundai said in a press release.

However, things are not going according to plan as sales have dipped since the relaunch. The combined sales of the three aforementioned models last month stood at 2,225 units, down 17 percent from October.

By model, the i40 was the worst performer with only 739 units sold last month, 500 fewer than in October. The other two also saw drops and failed to meet their monthly averages for the year. 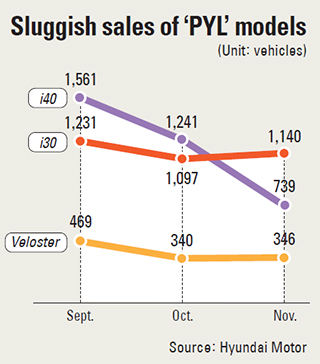 This spells bad news for Hyundai as it spent over 270 billion won ($250.44 million) and 40 months making the Veloster, and nearly five years developing the i40.

As sales of small imported cars continue to rise in Korea, Hyundai has been trying to defend its position in the market using these models, but it seems to have been suffering from a vague and overly-complicated brand identity.

Industry insiders say the marketing strategy has failed to establish a strong emotional connection with consumers.

“Reinforcing marketing efforts does not necessary mean that you can guarantee sales,” said Kim Pil-soo, a professor of automotive industry studies at Daelim University College. “Automakers first need to make cars that satisfy the needs of customers.”

Hyundai said it’s too early to judge whether its PYL marketing is a success and that it will try harder to connect with young customers.

“PYL marketing is not about increasing sales, but rather it’s a way of communicating better with consumers,” an employee from Hyundai’s communications department said. “It’s going to take some time before it leads to actual sales.”

To give things a kick start Hyundai is offering financial discounts and other promotions. Those who purchase an i30 or Veloster can receive discounts of 300,000 won or a 3 percent interest rate on loans for 36 months. Buyers of an i40 can get 1 million won off the retail price in December.

Hyundai will also give out 300,000 won discount coupons to those who change their cars from imported models to its PYL models.