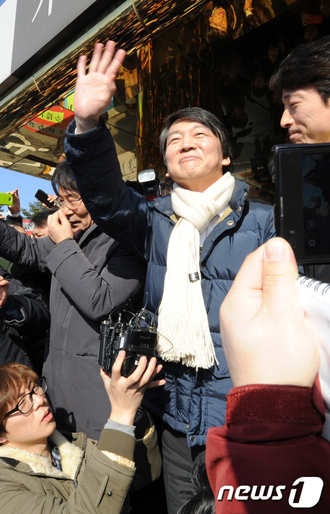 Former independent presidential hopeful Ahn Cheol-soo yesterday announced that he won’t take a position in the next president’s administration, no matter who wins the upcoming election.

Ahn, a 50-year-old software mogul and professor, publicly bowed out of the race and backed the Democratic United Party’s Moon Jae-in. At the time, he pledged to support the opposition candidate without taking any privileged titles.

“I will not take any positions appointed [by the new president] under the next administration,” he said during a speech encouraging people to vote for Moon at Chonbuk National University, Jeonju, North Jeolla, in front of a crowd of about 500 people.

Ahn said he made the decision based on his strong desire for a new political system. To date he has publicly lashed out at the political status quo and demanded political reform, such as cutting the number of parliamentary seats.

“We need reform in politics and the economy,” he said. “For political reform, abandoning all privileges is mandatory. Economic reform means improving the livelihood of everyone.”

Ahn’s remark came after the ruling Saenuri Party’s spokesman Lee Sang-il said last week that Ahn and Moon appear to “share the state power” and demanded they “clarify transparently how they would divide the power in front of people.” The Saenuri Party has also criticized Moon as “begging” for Ahn’s support.

Some political analysts assumed that if Moon becomes the next president, he will probably appoint Ahn to a high-ranking government post, such as prime minister. Moon also has said that he will “treat Ahn nicely” if he wins the election.

“As he said in his exit speech, Ahn is just making clear that he ‘won’t participate in the cabinet of the next president’ as he promised not to take any titles,” Yoo Min-young, Ahn’s spokesman, told reporters yesterday.

Ahn also urged citizens in the North Jeolla city to cast their ballots in the Dec. 19 election. Political observers say Ahn can still swing young, undecided voters who like his reformist image.

“The day of Dec. 19 is an important day to decide the future for our children and for us,” Ahn said. “I think everybody will vote on the day, right?”

The two liberals had a tug-of-war over negotiating how to merge their campaigns, but Ahn gave up his candidacy in a tearful speech and endorsed Moon as a single liberal candidate.