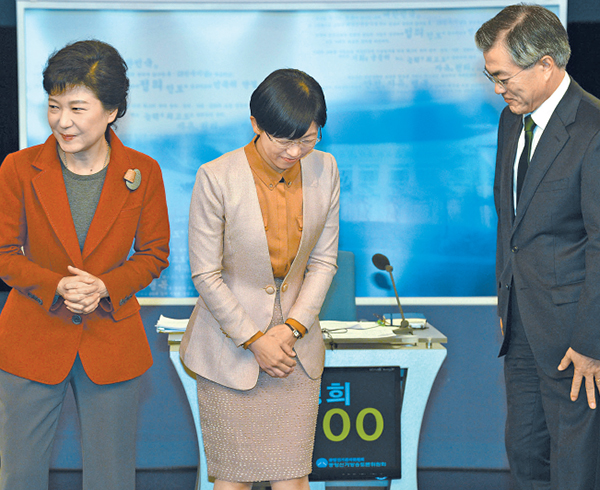 
Presidential candidates of the three major political parties yesterday squared off in a live TV debate over their plans for economic democratization and conglomerate reform.

While all three of them promised to bring economic democracy to the country to resolve the widening wealth gap, they gave different positions on the specifics, particularly conglomerate reform.

Lee, who represents the left-leaning UPP, didn’t hesitate to state her goal of dismantling the country’s conglomerates. She also criticized the Saenuri Party for its cozy relationship with large business groups.

“The Saenuri Party received political funds from conglomerates, gave them banks and cut taxes for the rich,” Lee said. “The party is not qualified to talk about economic democratization. It’s no different than a gangster with a tattoo on his arm saying that he will be nice.”

She, then, further said Park’s presidential bid was no different from Samsung Group Chairman Lee Kun-hee’s plot to hand over the ownership of the conglomerate to his son.

Moon also said yesterday that his pledge includes reforming the conglomerates. “Since the 1980s, no newly established company grew to become one of the top 30 business groups in Korea,” he said. “In contrast, Apple, Microsoft and Google grew to be top companies. That’s because of the unfair business practices of the conglomerates.”

Park was more moderate about conglomerate reform. She focused more on strengthening the fair trade order of the country’s economy, while making clear her opposition to the ban on the circular cross-unit equity investments of conglomerates.

Conglomerate owners have used circular investment to strengthen their control over affiliates in their business groups. The practices were criticized strongly by civic groups and liberals, and ownership structure overhaul of the conglomerates became a hot topic during the debate.

“I think it is a stretch to say that the issue of the circular cross-unit equity investment is the only thing about economic democratization,” she said, making clear that she has no intention of forcing the conglomerates to resolve the existing investments.

“The practice was legitimate in the past,” Park said. “If they were to resolve it at once, trillions of won will be needed. We have to think about the ill effect on the economy. The money should be used to make new investments and create jobs, and that will actually help the people. If that money is spent to resolve the circular cross-unit equity investment, no one will benefit from it and the workers for the conglomerates’ subcontractors will have to suffer.”

Yesterday’s debate dealt with the theme of the presidential candidates’ measures to cope with the prolonging economic recession, economic democratization, job creation and employment stability, and Park and Lee were engaged in yet another testy, confrontational debate just like last week’s first session on politics and national security. In the first debate, Lee caught not only Park and Moon but also viewers off guard with her no-holds-barred attack on front-runner Park.

Lee opened fire first at Park in her two-minute keynote speech. “After the first debate, the ruling Saenuri Party sponsored a bill to bar me from the TV debate,” Lee said. “It is shocking. It is Park Chung Hee style.”

The late strongman Park Chung Hee is the father of Park Geun-hye. Lee hit on their family connection multiple times throughout the debate.

Lee, then, singled out Samsung Group Chairman Lee and Hyundai Motor Group Chairman Chung Mong-koo to hold them responsible for the poor working conditions of their workers. “They are ruling above the Constitution,” Lee said. “Let’s take them down from their emperor seats. That is economic democratization.”

In her keynote speech, Park promised that she will rebuild the middle class of the country. She said her pledges are focused on making 70 percent of the nation middle class.

Moon, in his speech, said his plan to create jobs is the best economic and welfare policies.

Asked about their crisis management ability, Lee used the answer to once again attack Park. She said she has lived a working-class life, while Park never had to pay for her own housing throughout her life, including her 18 years in the Blue House. “Maybe she understands with her head about housing costs, but she would never understand with her heart,” Lee said.

Lee also asked Park if she knew about the minimum wage of the Korean laborer, and Park shot back at her opponent.

“The minimum wage for this year is 4,580 won [$4.24] and for the next year is 4,860 won,” Park said. “The presidential debate is not a pop quiz. You are behaving as if you are a school teacher checking on a student’s homework. If you continue to do this, the voters will think this is strange.”

Park and Moon also had a heated exchange about the failures of past governments. Moon held Park responsible for the current administration’s failure to narrow the wealth gap. Park criticized Moon for the same issue, saying that the Roh government mismanaged the real estate market and that spilled over to this administration.

Yesterday’s debate was the second out of three. The last one on culture and social issues will take place among the three candidates on Sunday.