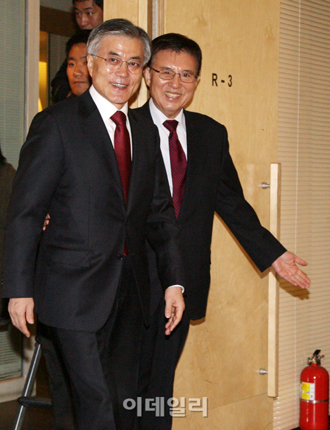 Kim Deog-ryong, a former five-term lawmaker who once worked as the floor leader of the Grand National Party, the predecessor of Park’s Saenuri Party, endorsed Moon.

The 72-year-old politician from North Jeolla also played an instrumental role in President Lee Myung-bak’s victory in 2007 and served as Lee’s special adviser on national unity.

It was the first time a politician who served in a senior post in the current administration has decided to support Moon.

“Based on the belief that history shouldn’t repeat itself, I made an agonizing decision to leave the Saenuri Party which I was a founding member of 15 years ago,” Kim said yesterday.

Kim said he proposed to Moon creating a catchall government to embrace the Ahn Cheol-soo phenomenon and to persuade the DUP to make a sacrifice to build a new political order.

He said Moon replied positively to his suggestion.

In addition to Kim, several other members of the so-called Sangdo-dong faction, named after the location of the residence of the former President Kim Young-sam, endorsed Moon yesterday after their meeting with the DUP candidate.

“The politicians who led democratization of our country were split over the 1987 presidential election and the subsequent merger [of their parties in 1990],” Moon said. “And that caused bitter damage to the country. In the politics of grand unity, the starting point will be uniting the former democracy fighters.”

In the 1987 presidential election, Roh Tae-woo ran against three opposition candidates including Kim Young-sam, Kim Dae-jung and Kim Jong-pil. Although Kim Young-sam and Kim Dae-jung were allies in their democratization struggle against the authoritarian Chun Doo Hwan regime, they failed to merge their bids and ran separately, splitting up the supporters. Roh, considered the successor of the Chun regime, won the election.

Kim Deog-ryong yesterday said his decision to separate from the Saenuri Party and Park was difficult but inevitable.

“She is a political leader with great qualifications,” Kim said, “but she is destined to repeat the past, particularly the era of authoritarianism and political strife because of her unavoidable limits and the tendencies of her followers.”

He then said Moon is the only hope he found for political reform that will bring about a mature democracy, national unity and unification of the two Koreas and asked the voters to support Moon.

He also said that not everyone in the Sangdo-dong faction supports Park, although the former president had expressed his endorsement of the daughter of the late strongman Park Chung Hee.

“We supported the former president and participated in the democratization movement,” he said. “Taking into account our lives and the values that we promoted, Park has some conflicting issues, so we had to make this choice.”

The Saenuri Party appeared to be perplexed by Kim’s decision to back the Moon campaign, but stressed that the former president’s endorsement of Park remains unchanged.

“Kim Deog-ryong’s decision to back Moon came so abruptly,” Rhee In-je, a co-chairman of the Saenuri Party’s Central Election Committee, said in an interview with the MBC radio. “I am very perplexed.”

Meanwhile, a key Jeolla politician who planned to declare his support for Park yesterday was forced to give up his plan.

Representative Park Joo-sun, an independent lawmaker representing Gwangju’s Dong District, said yesterday that he would announce his position at a later date due to opposition from his supporters.